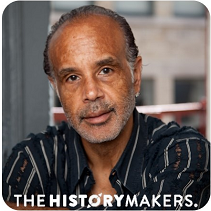 Music executive Ramon Hervey II was born on October 18, 1950 in Chicago, Illinois to Ramon T. Hervey and Winifred Hervey. He attended Lompoc Junior High School and graduated from Cabrillo Senior High School in 1968 in Lompoc, California. He then received his B.A. degree from Whittier College in Whittier, California, in 1972.

Hervey served as a flight attendant for Pan American Airlines from 1973 until 1975. He then entered the music industry, serving as a publicist for Starlite Music Artists from 1974 until 1975, as editor for Hamlett Marsh Publishers from 1975 until 1976, and as a writer/publicist for Motown Records from 1976 until 1977. While at Motown, Hervey worked on the publicity campaigns for artists like Stevie Wonder, Smokey Robinson, Marvin Gaye, and Diana Ross. Following his departure from Motown, Hervey joined Rogers & Cowan as a writer/publicist, and was later promoted to director of music and vice president of music and talent. During his tenure at Rogers & Cowan, he represented many high-profile clients including; Richard Pryor, Bette Midler, Herb Alpert, Nick Nolte, George Benson, and The Bee Gees, among others. When he left in 1981, he joined The Gibson Group (later named The Group) as a partner and co-president. Hervey remained with The Group until 1986. Some of his most noted clients were; Little Richard, Bette Midler, Vanessa Williams and Rick James. He then founded his own public relations and management company, Hervey & Company, with gospel legend Andrae Crouch becoming his first management client. He has also managed the career of Little Richard, and was credited for successfully revitalizing Little Richard’s career with his best-selling and controversial biography, Little Richard, The Quasar of Rock ‘n’ Roll, in addition to singer and actress Vanessa Williams, songwriter and producer Kenneth “Babyface” Edmonds, Motown recording artist Zhane, R&B singer Kenny Lattimore, keyboardist Philippe Saisse and acapella ensemble Sweet Honey In The Rock, among others.

In addition to developing his public relations and management companies, Hervey has been involved in the production of several documentary film and television projects. documentaries. In 2004, he served as executive producer to the documentary Chisholm ’72- Unbought & Unbossed, which won a Peabody Award. Hervey also served as a music supervisor for the documentaries, Free Angela and Hot Flash Havoc. He was also executive producer of televised music specials for Andrae Crouch and Kenny “Babyface” Edmonds.

Ramon Hervey II, was interviewed by The HistoryMakers on April 12, 2017.