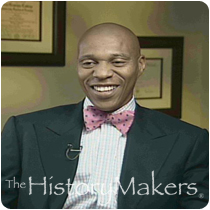 See how Ralph Simpson is related to other HistoryMakers
Donate Now

High school principal Ralph Simpson was born on December 14, 1963 in Atlanta, Georgia to Roxie and Harry Simpson. Simpson was an average student and attended the Atlanta Public Schools and graduated from Southwest High School. Simpson enrolled in West Georgia College and received his B.A degree in criminal justice in 1986.

After graduation, Simpson worked for the Georgia State Department of Corrections for four years to become a teacher. He was employed with the DeKalb County Board of Education. In the DeKalb School System, he experienced tremendous success as a teacher, mentor, and leader.

Simpson returned to West Georgia College to pursue his M.A. degree in administration and supervision. In 1996, Simpson was promoted to assistant principal of discipline, instruction, and attendance at Miller Grove Middle School in Lithonia, Georgia. In 1998, Simpson was assigned to Stone Mountain High School as the assistant principal of discipline, and in 2000, Simpson became the first African American principal in the history of Stone Mountain, Georgia. Simpson earned his Ph.D. in educational leadership at the University of Sarasota in February of 2004.

See how Ralph Simpson is related to other HistoryMakers
Donate Now
Click Here To Explore The Archive Today!