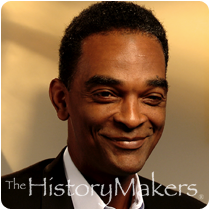 See how Ralph Sampson is related to other HistoryMakers

Basketball player Ralph Sampson was born on July 7, 1960 in Harrisonburg, Virginia. Standing at 7’4’’, he was born with a natural talent for basketball. Sampson attended Harrisonburg High School, where he led the basketball team to victory in two State AA Championships in 1978 and 1979. Sampson then went on to attend the University of Virginia, where he received his B.A. degree and played for the university’s basketball team, the Cavaliers. During college, Sampson won three Naismith Awards for National Player of the Year and was only the second person to do so. He also received an unprecedented two Wooden Awards for Player of the Year. In 1980, Sampson and the Cavaliers won the National Invitation Tournament. In 1981, the Cavaliers made it to the NCAA Final Four.

Referred to as the most recruited college basketball player of all time, Sampson was the first pick in the 1983 NBA draft. Drafted by the Houston Rockets, Sampson won the NBA Rookie of the Year Award and played in the NBA All-Star Game for the first of four times. In 1984, the Rockets drafted Hakeem Olajuwon and the two came to be known as the “Twin Towers,” an unstoppable basketball duo that played together in 1985’s NBA All-Star Game. Sampson was named MVP for that game, and earned a spot on the All-NBA Second Team. In 1986, Sampson injured his knee and was traded to the Golden State Warriors. He went on to play for the Sacramento Kings and the Washington Bullets. Unable to fully recover from several knee and back injuries, Sampson retired in 1992.

In 1996, Sampson was inducted into the Virginia Sports Hall of Fame. In 2002, Sampson was named to the Atlantic Coast Conference 50th Anniversary Men’s Basketball Team, a position that honored him as one of the 50 best basketball players in the history of the ACC. Sampson founded The Sampson Group, a consulting group, in 2005. In 2006, he went on to found Winner’s Circle Community, an online community dedicated to providing a forum for open and informed communication. That same year, Sampson also founded the Winner’s Circle Foundation, an organization to help young athletes achieve success. In 2010, he published a book entitled Winner’s Circle: The Ralph Sampson Game Plan; What Great Players Do Before, During and After the Game to help young athletes mentally prepare for and achieve success.

See how Ralph Sampson is related to other HistoryMakers
Click Here To Explore The Archive Today!