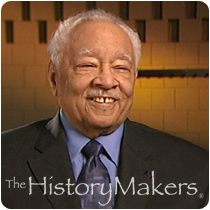 Chemist and chemistry professor Ralph Gardner-Chavis was born on December 3, 1922 in Cleveland, Ohio to Vivian Hicks Gardner, a teacher and housewife, and Clarence Chavis Gardner, a musician and government worker. Gardner-Chavis was educated in the Cleveland Public School system. He attended Bolton Elementary School and Audubon Junior High School. Gardner-Chavis graduated from John Adams High School in 1939 and went on to earn his bachelor’s degree in chemistry from the University of Illinois at Urbana-Champaign in 1943. He completed his graduate studies at Western Reserve University in Cleveland, Ohio, earning both his master’s and Ph.D. degrees in chemistry in 1952 and 1959, respectively.

In order to avoid fighting in World War II, Gardner-Chavis took a job as a research assistant on the Manhattan Project between 1943 and 1947. The project resulted in the United States developing the atomic bomb to end the war in 1945. Immediately after leaving this position, Gardner-Chavis was unable to find a job as a chemist, so he worked as a waiter from 1947 to 1949. He was eventually hired as a research chemist and project leader at the Standard Oil Company in Ohio where he remained for almost twenty years. Gardner-Chavis then took a teaching position in Cleveland State University’s chemistry department where he held a full-time faculty position from 1968 to 1985. As a professor, Gardner-Chavis had an interest in early childhood learning and development, and he started a program with his adult students that advocated reading to babies. He fought for the inclusion of black studies and multi-racial courses in the curriculum at CSU. Gardner-Chavis later combined his part-time teaching with work in the research lab of the Molecular Technology Corporation, where he was also on the board of directors and served as vice president of research. Gardner-Chavis went on to hold emeritus status in the CSU chemistry department while continuing his research on catalysis and molecular technology.

Throughout his career as a chemist, Gardner-Chavis published numerous research articles. He became a member of the Kappa Alpha Psi Fraternity in 1942 and the American Institute of Chemical Engineers (AIChE) in 2001.

See how Ralph Gardner-Chavis is related to other HistoryMakers
Donate Now
Click Here To Explore The Archive Today!