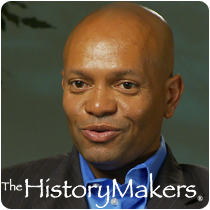 Etienne-Cummings has served as a visiting scientist at Lawrence Livermore National Laboratory and as a visiting African scholar at the University of Cape Town in South Africa. He received the National Science Foundation's CAREER Award in 1996 and the Young Investigators Program Award from the Office of Naval Research in 2000. In 2006, Science Spectrum awarded him its Trailblazer Award for Top Minorities in Science and in 2007, Etienne-Cummings was named a Kavli Frontiers in Science Fellow by the National Academies of Science. He has also won best paper awards in high impact technical Journals and Conferences. In 2012, he was elected Fellow of the IEEE for contribution in “Neuromorphic Sensory-Motor Circuits and Systems”. He is married to Shatima Etienne-Cummings, a patent attorney.

Ralph Etienne-Cummings was interviewed by The HistoryMakers on June 28, 2012.

See how Ralph Etienne-Cummings is related to other HistoryMakers
Donate Now
Click Here To Explore The Archive Today!