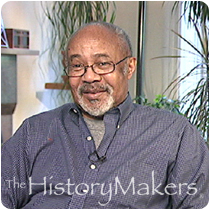 See how Ralph Arnold is related to other HistoryMakers
Donate Now

Artist Ralph Arnold was born in Chicago, Illinois on December 5, 1928. After graduating from Blue Island High School in 1946, Arnold attended the University of Illinois at Urbana-Champaign briefly in 1947. He later returned there before transferring and graduating from Roosevelt University in 1955. In 1976, Arnold earned his M.F.A. degree from the Art Institute of Chicago.

After leaving the U of I the first time, Arnold enlisted in the U.S. Army, serving in Korea from 1950 until 1952. After entering Roosevelt University, Arnold became involved with the Skyloft Players, a theater group, where he worked with Abena Joan Brown and Okoro Harold Johnson. After graduating, Arnold focused on his art, and in 1969, he was hired by Rockford College as an assistant professor of painting. From there, he taught briefly at Barrat College before being named chairman of the art department at Loyola University of Chicago. Arnold also served as an adjunct lecturer at the Art Institute of Chicago.

Arnold’s work crossed several genres, and could be seen in numerous galleries and collections. He created a series of collages entitled “Napoleon in Hawaii,” some of which were displayed in the Ukrainian Institute of Modern Art in Chicago, and he had another piece on display in the James R. Thompson Center in Chicago. Arnold also had an interest in bookbinding. He was a member of the Illinois Arts Council for more than thirty years.

See how Ralph Arnold is related to other HistoryMakers
Donate Now
Click Here To Explore The Archive Today!