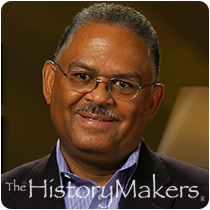 See how Radm. Stephen Rochon is related to other HistoryMakers
Donate Now

U.S. Coast Guard Rear Admiral Stephen W. Rochon was born in New Orleans, Louisiana and enlisted in the U. S. Coast Guard in 1970. He received a commission as an ensign in 1975 from the Officer Candidate School at Yorktown, Virginia. He then was assigned to Marine Safety Office (MSO) in California as assistant port operations and intelligence officer. In 1979, he served in the Coast Guard Reserve while attending Xavier University of Louisiana and graduated from there with his B.S. degree in business administration. Rochon then graduated from the National Defense University’s Industrial College of the Armed Forces (ICAF) in 1999 with his M.S. degree in national resource strategy. In 2002, he also completed the Harvard University John F. Kennedy School of Government Senior Executive Program for National and International Security, and the Massachusetts Institute of Technology School of Management.

In 1984, Rochon returned to active duty and served as Chief of the Reserve Training Branch of the Ninth Coast Guard District in Cleveland, Ohio. In this capacity, Rochon organized the Coast Guard’s first combat skills course with the Marine Corps in Quantico, Virginia and served on temporary duty in the Middle East to train the Royal Jordanian Coast Guard. Rochon served as the Coast Guard's director of personnel management in the aftermath of Hurricane Katrina and Hurricane Rita in 2005 where he provided support for Coast Guard personnel and their families. In 2006, Rochon became the Commander of Maintenance and Logistics Command at the U.S. Coast Guard’s Atlantic Headquarters; and, in, 2007, he was named Director of the Executive Residence and Chief Usher at the White House for former President George W. Bush. The first African American to hold the position, Rochon ran the executive mansion for four years for Presidents George W. Bush and Barack Obama, executing all major events at the White House and preserving the nation’s most historic home.

See how Radm. Stephen Rochon is related to other HistoryMakers
Donate Now
Click Here To Explore The Archive Today!