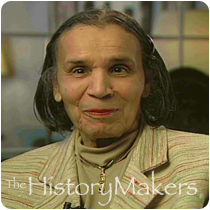 See how Rachel Noel is related to other HistoryMakers

Educator Rachel Louise Bassette Noel was born on January 15, 1918, in Hampton, Virginia. Both of her parents were college graduates and her father, Andrew William Ernest Bassette, Jr., was a lawyer. They believed in the importance of a higher education and stressed to her the significance of going to college. Noel earned her B.A. degree from Hampton Institute, later named Hampton University, and she received her M.A. degree in sociology from Fisk University.

Noel married Edmond F. Noel, a physician, in 1942 and the couple moved to Denver, Colorado. In 1965, she became the first African American to be elected to the Denver Board of Education. Having won this seat made her the first African American woman to hold public office in the State of Colorado. In 1968, Noel presented the Board of Education with the “Noel Resolution,” which required that the school district provide equal educational opportunities for every child in Denver. It also called for the superintendent to devise a plan that integrated the school system. After the resolution’s proposal was presented, she received numerous life-threatening phone calls; however, the resolution passed in February, 1970.

Appointed by former Governor Richard Lamm in 1976, Noel became the first African American to serve on the University of Colorado Board of Regents. In 1978, she won statewide election to a six-year term on the board and served a one-year term as chairperson of the board. She has been a professor at Metropolitan State College, as well as chairperson of the school’s African American Studies Department. She also served as a member of the Chancellor’s Advisory Committee for the Health Sciences at the University of Colorado, Boulder and Denver campuses and the Commissioner for the Denver Housing Authority.

Noel received numerous honors and awards including an Honorary Doctor of Public Service degree from the University of Denver; named one of Colorado’s Top 100 Citizens of the Century; the Martin Luther King, Jr. Humanitarian Award; and the naming in her honor of a public middle school in Denver, Rachel B. Noel Middle School. In 1981, the Rachel B. Noel Distinguished Professorship was created in her honor at Metropolitan State College. In 2004, the University of Colorado awarded her an Honorary Degree in Humane Letters. Noel passed away on February 4, 2008 at the age of ninety.

Rachel Noel was interviewed by The HistoryMakers on April 22, 2006.

See how Rachel Noel is related to other HistoryMakers
Click Here To Explore The Archive Today!