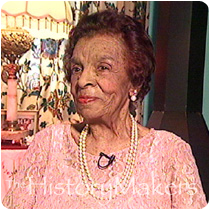 See how Rachel Brown is related to other HistoryMakers

Lifelong educator Rachel Hall Brown was born on November 16, 1912, in Glen Burnie, Maryland. Brown’s mother was a homemaker, and her father sold produce that he grew on their farm. She grew up the fourth of fourteen children. As she grew older, she was sent to live with relatives in nearby Baltimore because Glen Burnie did not have a high school for blacks to attend. Brown attended and graduated from Frederick Douglass High School in Baltimore in 1928. Douglass was also the alma mater of former Supreme Court Justice Thurgood Marshall and entertainers Cab Callaway and Anne Brown.

Upon graduation, Brown planned to attend Morgan State University, but was unable due to financial reasons. Instead she attended Coppin State University where she earned her degree and graduated in 1930. She received her first teaching assignment upon graduation at Skidmore School in Anne Arundel County, where she taught first, second and third grades. In 1932, Brown was reassigned to Jones School, where she met and married her husband, Philip Brown, who was the principal of the two-room school where they both worked. Shortly after her marriage, she and her husband attended classes at Morgan State University where both earned their bachelor’s degrees in education. In 1938, her husband led the effort to sue the Anne Arundel Board of Education for equal pay for African American teachers. The teachers were represented by former Supreme Court Justice, Thurgood Marshall. In 1955, Brown earned her master’s degree in education from New York University.

In 1966, Brown helped to integrate Anne Arundel County public schools when she was one of the first black teachers assigned to teach at Tyler Heights School. In 1970, Brown was appointed to the White House Conference on Children and Youth, an organization that promoted understanding of child development and fostering children’s mental and emotional health. Brown retired from the school system in 1973.

See how Rachel Brown is related to other HistoryMakers
Click Here To Explore The Archive Today! 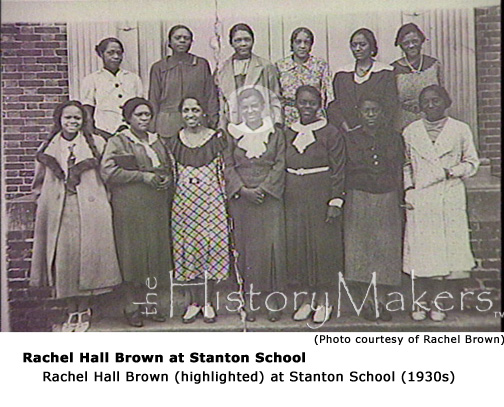 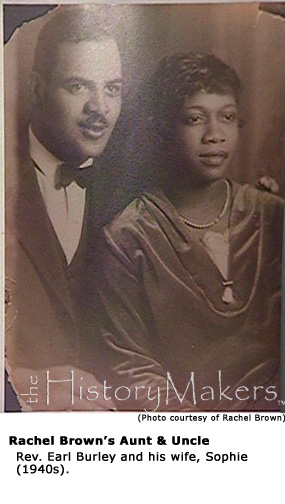