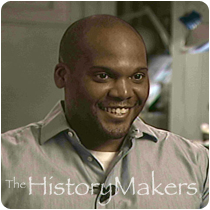 See how R. Gregory Christie is related to other HistoryMakers
Donate Now

Illustrator and freelance artist Richard Gregory Christie was born on July 26, 1971 in Plainfield, New Jersey to Ludria V. St. Amant Christie and Gerard A. Christie. Raised by his mother, a Louisiana Creole, and his father, a pharmacist from the Bronx, New York, Christie was raised in the Scotch Plains community near the Jerseyland Resort. He attended St. Bartholomew the Apostle Elementary School where he demonstrated a talent for art early on. In 1985, Christie worked for Commercial Art and Supply while he attended Scotch Plains Fanwood High School. Graduating in 1989, he enrolled in New York City’s School for Visual Arts (SVA). His first illustration was published by the Star Ledger in the summer of 1990. In 1993, Christie graduated from SVA with his B.F.A. degree.

In 1994, Christie illustrated the album cover of Justice System’s Summer in the City. Soon, his work graced the covers of jazz labels from all over the world, including Joe Sample’s Old Places Old Faces Warner Brothers, 1996; George Benson’s A Song for my Brother Giant Step Records, 1997; and Coltrane The Complete 1961 Village Vanguard Recordings GRP Impulse, 1997. Christie’s’ illustrations also appeared in numerous publications in Europe, Asia and America, including on the subway cars of the New York Metro Transit Authority. In 1996, he illustrated Davida Adedjouma’s The Palm of My Heart; Poetry by African American Children which had an introduction by Lucille Clifton. The owner of G.A.S. (Gregarious Art Statements) Art Gifts, an online children’s bookstore that sells the books, art and stationery connected to his published titles, he has also served as a regular contributor to The New Yorker magazine. Additionally, Christie has illustrated the biographies of many significant historical and cultural figures, including Richard Wright, Langston Hughes, and Sojourner Truth. He also has contributed to notable projects such as Karyn Parsons’ Sweet Blackberry history films, featuring narration by Chris Rock, Queen Latifah and Lawrence Fishburne on Netflix and HBO.

Christie won six Coretta Scott King Awards, including for Brothers in Hope; The Story of the Lost Boys of Sudan, and for illustrating Only Passing Through: The Story of Sojourner Truth. He has also been a recipient of an NAACP Image Award and a Caldecott Honor. In 2013, he illustrated the New Orleans Jazz and Heritage Festival, Congo Square Poster and was chosen as the designer for the U.S. Post Office’s Kwanzaa Forever stamp.

Christie was interviewed by The HistoryMakers on April 16, 2007.

See how R. Gregory Christie is related to other HistoryMakers
Donate Now
Click Here To Explore The Archive Today!