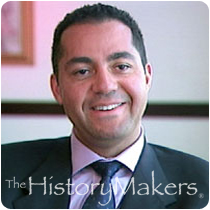 See how R. Donahue Peebles is related to other HistoryMakers

Born on March 2, 1960, the only son of a civil servant and a real estate broker, Roy Donahue Peebles grew up in Washington, D.C. After his parents’ divorce in 1967, Peebles moved with his mother to Detroit, spending only six months there before returning to Washington, D.C., to live with his father.

As a teenager, Peebles worked as a congressional page and attended the United States Capitol Page High School, where he graduated in 1978. Following high school, he enrolled in Rutgers University, planning to go into medicine. However, in 1979, Peebles started his real estate career as an appraiser. In three years, he opened his own firm and had clients such as the United States Department of Housing & Urban Development and major financial and banking institutions. In 1983, at the age of twenty-three, Peebles’ career took a meteoric rise after Mayor Marion Barry appointed him to the District of Columbia’s Board of Equalization & Review (now known as the Board of Real Property Assessment & Appeal). In 1984, he became chairman of the board, the youngest chairman of any board in Washington, D.C.’s history. He served as chairman until 1988.

In 1995, while on vacation in Miami with his wife and young son, Peebles read an article about Miami’s search for a black developer to develop two old beach hotels, the Shorecrest and the Royal Palm. In early 1997, he decided to take his company, which had developed and/or owned over one million square feet of commercial properties in Washington, D.C., and moved its headquarters to Miami, Florida. Peebles expanded his company, The Peebles Corporation, by creating hospitality and luxury residential divisions dedicated to the development and ownership of premiere hotel properties and high-end condominium properties. Peebles is recognized as the first African American to truly diversify South Florida’s all-white ranks of developers. After a lengthy process, Peebles’ company, Peebles Atlantic Development Corporation, was chosen to build the $60 million project. In 1998, Peebles purchased the historic Miami Beach Bath Club that he developed into a luxury condominium complex.

Peebles is the vice chairman of the Greater Miami Conventions & Visitors Bureau, a former board member of Florida International University, and a member of the Visitors Industry Council Board. In March of 2004, he was named as an honorary chair of the Florida Builder’s Association.

See how R. Donahue Peebles is related to other HistoryMakers
Click Here To Explore The Archive Today!