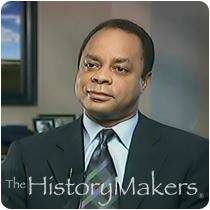 See how Quintin Primo, III is related to other HistoryMakers

Quintin E. Primo III was born March 14, 1955, in Rochester, New York. His mother, Winnifred Primo, and late father, Episcopal Bishop Quintin E. Primo, Jr., were both raised in the South, both having ancestral roots in the Caribbean. Primo attended Lincoln Elementary in Rochester, New York, Friends School in Wilmington, Delaware, and Miller Junior High School in Detroit, Michigan. At Cass Technical High School in Detroit, Primo excelled as a musician. During this time, Primo’s father was appointed Bishop of the Episcopal Church and the family moved to Chicago’s Homewood-Flossmoor area where Primo graduated from Homewood-Flossmoor High School in 1973. He then attended Indiana University, where he earned a B.S. degree in finance and graduated with honors. In 1977, he enrolled in Harvard Business School, receiving his M.B.A. in 1979.

That same year, Primo started his career at Citicorps Real Estate, where he specialized in real estate lending. In 1988, he fulfilled a lifelong dream and opened his own investment banking business, Quintin Primo and Company. After several years, the company folded and Primo teamed up with friend and colleague Daryl Carter in 1992 to form CAPRI Capital Management. Today, CAPRI manages seven billion dollars in assets.

Primo serves on the board of the Chicago Sinfonetta, the Chicago Community Trust, the Federal Reserve Bank of Chicago Advisory Board, University of Chicago Hospitals, the Real Estate Council and the Primo Women and Children Center. He lives in the Chicago area with his wife, Diane, and their children, Francesca and Quintin IV. Primo is writing a book about his father in the Episcopal Church entitled The Making of a Black Bishop.

See how Quintin Primo, III is related to other HistoryMakers
Click Here To Explore The Archive Today!