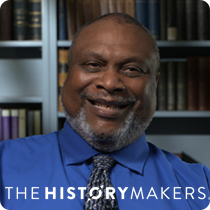 See how Quintard Taylor is related to other HistoryMakers

Historian Quintard Taylor was born on December 11, 1948 in Brownsville, Tennessee to Quintard Taylor and Grace Taylor. He graduated from Carver High School in Brownsville, Tennessee and received his B.A. degree in American history in 1969 from St. Augustine’s College in Raleigh, North Carolina, and his M.A. and Ph.D. degrees in American history from the University of Minnesota-Minneapolis in 1971 and 1977, respectively.

In 2007, Taylor founded BlackPast.org, an online reference database on African American history, with over thirty million users since its launch. In 2008, Taylor published a collection of primary documents titled From Timbuktu to Katrina: Readings in African American History. In 2009, he published, America-I-Am, Black Facts: The Story of a People Through Timelines, 1601-2000. Along with Dr. Samuel Kelly, Taylor co-authored Dr. Sam: The Autobiography of Dr. Samuel Kelly, Soldier, Educator, Advocate and Friend in 2010. Taylor also served on the Board of HistoryLink Interactive History Project.

Historian Quintard Taylor was interviewed by The HistoryMakers on October 9, 2017.

See how Quintard Taylor is related to other HistoryMakers