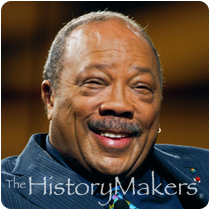 An impresario in the broadest and most creative sense of the word, Quincy Jones’ career has encompassed the roles of composer, record producer, artist, film producer, arranger, conductor, instrumentalist, television producer, record company executive, magazine founder and multi-media entrepreneur. As a master inventor of musical hybrids, he has shuffled pop, soul, hip-hop, jazz, classical, African and Brazilian music into many dazzling fusions, traversing virtually every medium, including records, live performance, movies and television.

Quincy Jones was born on March 14, 1933, in Chicago, Illinois, and brought up in Seattle, Washington. While in junior high school, Jones began studying trumpet and sang in a Gospel quartet at age twelve. His musical studies continued at the prestigious Berklee College of Music in Boston, Massachusetts, where he remained until the opportunity arose to tour with Lionel Hampton’s band as a trumpeter, arranger and sometime-pianist. He moved on to New York and the musical “big leagues” in 1951, where his reputation as an arranger grew. By the mid-1950s, he was arranging and recording for such diverse artists as Sarah Vaughan, Ray Charles, Count Basie, Duke Ellington, and Dinah Washington.

In 1957, Jones decided to continue his musical education by studying with Nadia Boulanger, the legendary Parisian tutor to American expatriate composers such as Leonard Bernstein and Aaron Copeland. To subsidize his studies, he took a job with Barclay Disques, Mercury’s French distributor. Among the artists he recorded in Europe were Charles Aznavour, Jacques Brel and Henri Salvador, as well as such visitors from America as Sarah Vaughan, Billy Eckstine and Andy Williams. Jones’ love affair with European audiences continues through the present: in 1991, he began a continuing association with the Montreux Jazz and World Music Festival, which he serves as co-producer.

Jones won the first of his many Grammy Awards in 1963 for his Count Basie arrangement of “I Can’t Stop Loving You.” Jones’ three-year musical association as conductor and arranger with Frank Sinatra in the mid-1960s also teamed him with Basie for the classic Sinatra At The Sands, containing the famous arrangement of “Fly Me To The Moon.”

When he became vice-president at Mercury Records in 1961, Jones became the first high-level black executive of an established major record company. Toward the end of his association with the label, Jones turned his attention to another musical area that had been closed to blacks--the world of film scores. In 1963, he started work on the music for Sidney Lumet’s The Pawnbroker, and it was the first of his thirty-three major motion picture scores. In 1985, he co-produced Steven Spielberg’s adaptation of Alice Walker’s The Color Purple, which won eleven Oscar nominations, introduced Whoopi Goldberg and Oprah Winfrey to film audiences, and marked Jones’ debut as a film producer.

In 1990, Jones formed Quincy Jones Entertainment (QJE), a co-venture with Time Warner, Inc. The new company, which Jones served as CEO and chairman, produced NBC Television’s Fresh Prince Of Bel Air (now in syndication), and UPN’s In The House and Fox Television’s Mad TV. He is also the publisher of VIBE Magazine (as well as founder), SPIN and Blaze magazines. Also in 1990, his life and career were chronicled in the critically acclaimed Warner Bros. film, Listen Up: The Lives of Quincy Jones, produced by Courtney Sale Ross.

The laurels, awards and accolades have been innumerable: Quincy has won an Emmy Award for his score of the of the opening episode of the landmark TV miniseries, Roots, seven Oscar nominations, the Academy of Motion Picture Arts and Sciences’ Jean Hersholt Humanitarian Award, twenty-seven Grammy Awards, and N.A.R.A.S.’ prestigious Trustees’ Award and The Grammy Living Legend Award. He is the all-time most nominated Grammy artist with a total of seventy-nine Grammy nominations. In 1990, France recognized Jones with its most distinguished title, the Legion d’ Honneur. He is also the recipient of the French Ministry of Culture’s Distinguished Arts and Letters Award. Jones is the recipient of the Royal Swedish Academy of Music’s coveted Polar Music Prize and the Republic of Italy’s Rudolph Valentino Award. He is also the recipient of honorary doctorates from Howard University, the Berklee College of Music, Seattle University, Wesleyan University, Brandeis University, Loyola University (New Orleans), Clark Atlanta University, Claremont University’s Graduate School, the University of Connecticut, Harvard University, Tuskeegee University, New York University, University of Miami and The American Film Institute. Jones was also named a 2001 Kennedy Center Honoree, for his contributions to the cultural fabric of the United States of America.

Celebrating more than fifty years performing and being involved in music, Jones’ creative magic has spanned over six decades, beginning with the music of the post-swing era and continuing through today’s high-technology, international multi-media hybrids. In the mid-1950s, he was the first popular conductor-arranger to record with a Fender bass. His theme from the hit TV series Ironside was the first synthesizer-based pop theme song. As the first black composer to be embraced by the Hollywood establishment in the 1960s, he helped refresh movie music with badly needed infusions of jazz and soul. His landmark 1989 album, Back On The Block--named “Album Of The Year” at the 1990 Grammy Awards-- brought such legends as Dizzy Gillespie, Ella Fitzgerald, Sarah Vaughan and Miles Davis together with Ice T, Big Daddy Kane and Melle Mel to create the first fusion of the be bop and hip hop musical traditions; while his 1993 recording of the critically acclaimed Miles and Quincy Live At Montreux, featured Jones conducting Miles Davis’ live performance of the historic Gil Evans arrangements from the Miles Ahead, Porgy and Bess and Sketches of Spain sessions, garnered a Grammy Award for Best Large Jazz Ensemble Performance. As producer and conductor of the historic “We Are The World” recording (the best-selling single of all time) and Michael Jackson’s multi-platinum solo albums, Off The Wall, Bad and Thriller (the best selling album of all time, with over forty-six million copies sold), Jones stands as one of the most successful and admired creative artists/executives in the entertainment world.