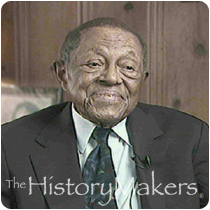 See how Quentin Mease is related to other HistoryMakers

YMCA executive and civic leader Quentin Ronald Mease was born October 25, 1908 in the now extinct, black populated, coal mining town of Buxton, Iowa. His father was a coal miner, labor leader and Justice of the Peace. Mease’s mother was a seamstress and businesswoman. Mease attended Second Street Elementary School in Buxton. When his father died in 1920, the Mease family moved to Des Moines, Iowa where Mease was active with the Crocker Branch YMCA. He graduated from West High School in 1924 and Des Moines University in 1928. During the same period Mease went from Crocker Branch YMCA volunteer to nineteen-year-old executive director in 1927. He was active in the NAACP, the Interracial Commission and the Negro Chamber of Commerce.

In 1942, Mease was inducted into the United States Army Air Corps. where he rose from the rank of enlisted man to Captain while serving in the Pacific Theatre of World War II. His squadron under General MacArthur, landed at Hiroshima one week after the atomic bomb dropped in 1945.

After earning a Masters degree in social work administration in 1948 from George Williams College in Chicago, Illinois, Mease accepted the position of executive director of the Bagby Street YMCA in Houston, Texas. There, he launched a successful building campaign for a new facility, which became the South Central YMCA. As leader of the new YMCA, Mease founded the Houston Area Urban League, the Eliza Johnson Home, and the Houston Council on Human Relations. These institutions led to the peaceful desegregation of Houston’s public facilities. When student protesters at Texas Southern University needed a new headquarters, Mease let them use the YMCA. Mease has served on over thirty non-profit boards in Des Moines, Chicago and Houston and raised an estimated $270 million dollars.

Mease was a founder and chairman for nineteen years of the Harris County Hospital District and chaired the Harris County Hospital Foundation. He was Emeritus Member of the Baylor College of Medicine and the Texas Medical Center. The naming of Houston’s Quentin R. Mease Community Hospital is one of many honors garnered by Mease’s community work. The late Congressman Mickey Leland read a tribute to Mease into the congressional record in 1981. Mease's wife, Jewell, passed away in 1978. He also had a grown daughter and grandson.

See how Quentin Mease is related to other HistoryMakers
Click Here To Explore The Archive Today!