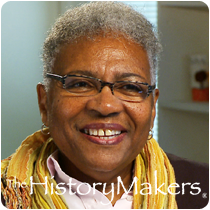 See how Queen Brooks is related to other HistoryMakers
Donate Now

Artist Queen Brooks was born in Columbus, Ohio on April 23, 1943 to Hattie Owens and Pomp Brooks. She graduated from East High School in 1971. After working for Central Ohio Transit Authority, Brooks apprenticed under Columbus photographer Kojo Kamau and began working at the J. Ashburn Jr. Youth Center as an arts and crafts instructor in 1980. While at the Ashburn Youth Center, Brooks discovered the art of pyrography or wood burning. Brooks then went back to school and graduated from Ohio State University with her B.F.A. and M.F.A. degrees in art in 1990 and 1992, respectively. In 1993, Brooks won the Lila Wallace, Reader’s Digest International Artist Award, which granted her a residency in the French port city of Abidjan in the Republic of the Ivory Coast, West Africa. Brooks then served as an adjunct professor in art instruction at Otterbein University from 1995 to 2002 and then at Ohio Dominican University from 2002 to 2006. In 2008, Brooks was hired as the lead artist for the Greater Columbus Arts Council’s Art in the Houseprogram.

Her work has been featured in Essence magazine and twice in the International Review of African American Art, and other publications. Brooks also created the portal entrance for the Kwanzaa Playground, Ohio’s first African-centered playground in Columbus, Ohio. Through a project grant from the Columbus Cultural Arts Center, Brooks, working with middle and high school students, designed and painted a mural at Columbus’ Krumm park area.

Brooks’ art has been exhibited at numerous sites throughout Ohio, and her works are in collections across the United States and in Abidjan, Cote D’Ivoire, West Africa.

Her work is among collections held in the collections of the Columbus Museum of Art, Ohio Dominican and Otterbein universities as well as the King Art Complex, Columbus, Ohio.

Brooks has also won numerous awards for her artwork, including the Ohioana Career Award in 2008, the highest recognition bestowed on an artist in the state of Ohio. She has earned distinction the Arts Freedom Award designee and an Arts Midwest National Endowment of the Arts Award in 2004 and 1994, respectively. Brooks also won the Excellence in the Arts Award from Ohio State University.

Queen Brooks was interviewed by The HistoryMakers on April 3, 2012.

See how Queen Brooks is related to other HistoryMakers
Donate Now
Click Here To Explore The Archive Today!