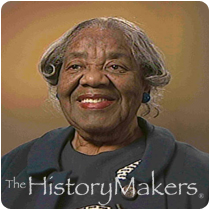 Favorite Food:
Fried Chicken
Favorite Quote:
Hello, How Are You?

Favorite Food:
Fried Chicken
Favorite Quote:
Hello, How Are You?

See how Prudence Burrell is related to other HistoryMakers

Nurse Prudence Hathaway Burns Burrell was born on March 23, 1916, in Mounds, Illinois, to Al Wade and Mary Burns. Burrell was raised in Danville, Illinois by Gwendolyn Chambliss, her caretaker. Growing up in Southern Illinois, she attended Douglas Elementary School in Danville. An outstanding Latin student, Burrell graduated from Lovejoy High School in Mound City in 1934. She attended nursing school at Kansas City’s segregated General Hospital No. 2. Burrell passed the state nursing board certification examination in 1939 as a registered nurse and soon enrolled in the University of Minnesota.

With the onset of World War II, Burrell decided to join the United States Army Nurse Corps at Fort Huachuca, Arizona in 1942. There, she tended to the famed Buffalo Soldiers and met dancer Fayard Nicholas. Although she attained the rank of first lieutenant of the United States Army Nursing Corps, she was not allowed to treat white troops because of her race. In 1943, Burrell was sent to Station Hospital 268 in Sydney, Australia, then to Brisbane, and eventually to Milne Bay, New Guinea in 1944. There, she taught first-aid techniques to other units, treated gun shot and other wounds, and specialized in the treatment of malaria. Transferred to the Philippine Islands in 1945, Burrell met and married Detroit native, Lieutenant Lowell Burrell. After a simple ceremony consisting of a wedding gown made from a parachute and a fifty-cent ring, she was transferred to Germany during the integration of the United States Armed Forces.

Returning to the United States, Burrell taught at Pacific Lutheran Hospital and earned her B.S. degree in public health from the University of Minnesota in 1951. Eventually, she and her husband moved back to Detroit where she taught mathematics in the Detroit Public Schools and became a health care analyst for the State of Michigan. An active volunteer in Detroit, Burrell delighted in sharing her past with school children. Burrell published her life story in a book called Hathaway in 1997.

See how Prudence Burrell is related to other HistoryMakers
Click Here To Explore The Archive Today!