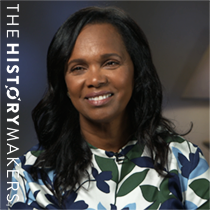 Corporate executive Priscilla Sims Brown was born on August 14, 1957 in Albuquerque, New Mexico to Marta Gabre-Tsadick. Her mother was the first woman to serve as a senator in Ethiopia until her family was forced to flee the country after the overthrow of Emperor Haile Selassie. Brown was later adopted and reared by Hattie Sims Roberts and attended the U.S. International School in Birkenfeld, Germany; Navajo High School in Many Farms, Arizona; and Richmond High School in Richmond, California. She went on to attend the University of California, Berkeley and San Francisco State University.

In 1980, Brown worked as an intern and then business reporter at KQED-TV in San Francisco. After briefly working as a stockbroker at Sutro and Co. and PaineWebber and Company, Brown joined the staff of the Equitable Life Assurance Society in Northbrook, Illinois in 1986. She remained there until 1991 when she became the vice president of Lincoln National Investment Management, a subsidiary of Lincoln National Corporation. Brown was promoted to chairperson of the Lincoln Advisor Funds in 1992 and then president of their broker dealer in 1994. In 1999, she was named vice president of the company’s investor relations group. Brown served as vice president of corporate and public affairs at the Lincoln Financial Group from 2003 to 2006 until her appointment as chief marketing and brand officer of the entire company. She raised the company’s consumer awareness, led the integration of key acquisitions and managed the company’s partnership with Lincoln Financial Field, the home of the Eagles. Brown left Lincoln Financial Group in 2009 to become the head of marketing at Sun Life Financial. There, she secured naming rights to Sun Life Stadium. After briefly serving as the chief marketing and development officer at AmeriHealth Caritas, Brown became the senior executive vice president and chief marketing officer for AXA US in New York City in 2014. She left AXA US in 2016 to pursue philanthropy and entrepreneurship and  become the CEO of Emerge.me in 2017.

Brown serves on the board of directors for her family’s nonprofit organization, Project Mercy, which provides comprehensive development in Ethiopia. She also serves on the board of directors of the Eagles Charities in Philadelphia, Pennsylvania; and the Board of Trustees of the Philadelphia Museum of Art and the TIAA. Brown is a member of the International Women’s Forum and Executive Leadership Council. Brown has received several awards and honors for her work including the CMO Content Engagement Award in 2017.

Priscilla Sims Brown was interviewed by The HistoryMakers on August 22, 2018.