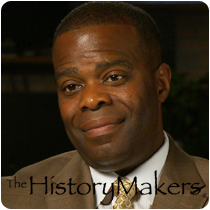 See how Princell Hair is related to other HistoryMakers

Broadcast executive Princell Hair was born on February 2, 1967 in Fort Lauderdale, Florida. Hair attended Fort Lauderdale High School and graduated in 1985. That same year, he enrolled in the U.S. Naval Academy, where he spent the next four years. Hair was then admitted to Florida International University in Miami, graduating two years later with his B.S. degree in broadcast journalism. He entered the world of journalism soon after, working as a writer and producer for WPLG-TV and WSVN-TV, ABC and Fox-affiliated stations, respectively. In 1993, Hair was hired as an executive producer for Chicago’s WSVN-TV. After two years, he was hired as an assistant news director for the CBS station WKMG-TV in Orlando, Florida. Hair was then named news director for Hearst television station WBAL-TV in Baltimore, Maryland, where he served from 1998 to 2001.

In 2001, Hair was hired by Viacom to oversee thirty nine CBS television stations. After two years with Viacom, he was appointed general manager for the Cable News Network (CNN) and later promoted to senior vice president at Turner Broadcasting, Inc. After enrolling at Emory University’s Goizueta Business School in Atlanta, Georgia, Hair obtained his M.B.A. degree in 2006. He was then named senior vice president of news operations for Comcast SportsNet, two years later; and, in 2012, was promoted to senior vice president of news and talent for NBC Sports Group, overseeing talent recruitment, negotiation and development.

Princell Hair was interviewed by The HistoryMakers on May 21, 2012.

See how Princell Hair is related to other HistoryMakers
Click Here To Explore The Archive Today!