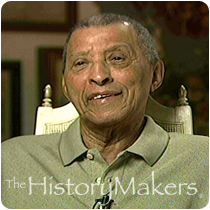 See how Prince Spencer is related to other HistoryMakers
Donate Now

Dancer Prince C. Spencer was born on October 3, 1917 in Jenkinsville, South Carolina to Lottie and Bunyon Spencer. Spencer’s family moved from South Carolina to Virginia, then moved to Boston, Massachusetts and finally settled in Toledo, Ohio. In 1941, Spencer joined the dance troupe, The Four Step Brothers, replacing longtime member Sylvester Johnson. The Four Step Brothers was a group of African American tap dancers that originated in the mid-1920s. They performed in several Hollywood films, and by 1946, had performed with Frank Sinatra. That same year, the group embarked on a six month European tour that included performances at the Parisian Le Lido and various other venues throughout Italy and Spain. The Four Step brothers served as trailblazers in the dance world, setting standards in their art and breaking down racial barriers. In almost forty years of performances onstage, in films and television, they danced throughout the world, inspiring others to emulate their tap and acrobatic feats.

The Four Step Brothers appeared uncredited in the 1947 film That’s My Gal. The group returned to the silver screen in 1953, appearing alongside Bob Hope in a film entitled Here Come the Girls. Throughout the 1950s and 1960s, the group became frequent guest performers on the "Ed Sullivan Show" and also performed on Jack Benny’s television show. They also toured Europe again in the 1950s, performing for the Queen of England.

The Four Step Brothers were awarded a Life Achievement Award from the Dance Masters of America in 1960. Spencer continued working in Hollywood, playing small roles and collaborating frequently on projects with comedian Redd Foxx. In 1985, the group received an additional life achievement award for helping to break the color barrier, and in 1988, they received a star on the Hollywood Walk of Fame. The following year, Spencer appeared as himself in the film Harlem Nights with Eddie Murphy and Richard Pryor.

Prince Spencer was interviewed by The HistoryMakers on November 3, 2007.

See how Prince Spencer is related to other HistoryMakers
Donate Now
Click Here To Explore The Archive Today!