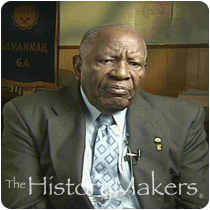 Favorite Color:
Green
Favorite Food:
Beans (Lima)
Favorite Time of Year:
Spring
Favorite Quote:
If You Want Your Prayers Answered, Get Up Off Your Knees And Hustle.

Favorite Color:
Green
Favorite Food:
Beans (Lima)
Favorite Time of Year:
Spring
Favorite Quote:
If You Want Your Prayers Answered, Get Up Off Your Knees And Hustle.

See how Prince Jackson, Jr. is related to other HistoryMakers
Donate Now

Prince Albert Jackson, Jr., was born on March 17, 1925, in Savannah, Georgia, to Julia and Prince Albert, Sr. Jackson graduated with honors from Beach-Cuyler High School in 1942 and joined the United States Naval Reserve. Jackson received his B.A. degree in mathematics from Savannah State University in 1949, and his M.A. degree from Courant Institute of Mathematical Sciences from the New York University Graduate School of Arts and Sciences in 1950. Jackson later received his Ph.D. in philosophy with distinction from Boston College. While studying at Boston College, Jackson was named one of the school’s first six Distinguished Alumni.

In 1971, Jackson became the seventh President of Savannah State College. During his tenure as president, Jackson established the third Naval Reserve Officer Training Corp (NROTC) at a university; he also established the University’s radio station, WHCJ-FM, which was the fifth station established on an African American college campus. The observation of Dr. Martin Luther King, Jr. Day was the result of Jackson’s initiative along with the increase in faculty and teachers holding doctorates. In 1978, Jackson stepped down as President of Savannah State University, but continued to serve as a member of the faculty until 1999 when he retired.

Jackson was the recipient of thirty-five academic awards and honors, and a member of twenty-nine professional and scholastic organizations. Jackson was also a lifetime member of the NAACP, where he served as President of the Savannah branch in 2003. Jackson authored over fourteen research and scholarly articles. After retiring in 1999, Jackson continued his active involvement in various community projects including being an advocate for the mentally challenged and the NAACP Voter Empowerment Project.

Jackson was married to the former Marilyn Striggles of Sylvania, Georgia; the couple had five children.

See how Prince Jackson, Jr. is related to other HistoryMakers
Donate Now
Click Here To Explore The Archive Today!