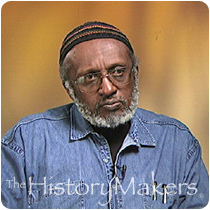 See how Prexy Nesbitt is related to other HistoryMakers

Even before completing his Ph.D. in 1975, Nesbitt was highly active in labor and equality movements; by 1976, he had become the national coordinator and field organizer for the Bank Withdrawal Campaign for the American Committee on Africa. Two years later Nesbitt was named the director of the Africa Project at the Institute of Policy Studies in Washington, D.C. In 1979, Nesbitt became the program director and secretary for research at the World Council of Churches, based in Geneva, Switzerland. Nesbitt returned to Chicago in 1984, where he continued his work as a labor organizer. In 1986, Chicago mayor Harold Washington named Nesbitt as a special assistant. The following year, the government of Mozambique appointed Nesbitt to serve as a consultant to help them represent their interests to the United States, Canada, and Europe; he remained in this post until 1992.

In 1990, Nesbitt took a post as a lecturer with the Associated Colleges of the Midwest, and in 1993, became the senior program officer with the Program on Peace & International Cooperation with the MacArthur Foundation. Nesbitt remained with the MacArthur Foundation until 1996, when he was named the dean of community engagement and diversity. In addition to his foundation work, Nesbitt worked as an African and American history teacher at his high school alma mater, Francis W. Parker School. Nesbitt also taught African History at Columbia College, and served as a consultant on diversity for the Francis W. Parker School; the University of Chicago Laboratory Schools; and the East Educational Collaborative in Washington, DC. In 2001, Nesbitt became the South African representative of the American Center for International Labor Solidarity in Johannesburg, South Africa, and the interim director for the American Friends Service Committee Africa Program. From 2003 on, Nesbitt worked as the Senior Multiculturalism and Diversity Specialist for the Chicago Teachers Center at Northeastern Illinois University.

Nesbitt has lectured both in the United States and abroad, and has written extensively, publishing a book and articles in more than twenty international journals. Nesbitt also served as a co-writer on the BBC production of The People’s Century program Skin Deep, about racism in the United States and South Africa. Over the course of his career, Nesbitt made more than seventy trips to Africa, including trips taken in secret to apartheid torn South Africa; his work has garnered him numerous awards throughout his career.

See how Prexy Nesbitt is related to other HistoryMakers
Click Here To Explore The Archive Today!