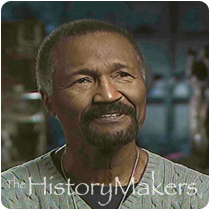 See how Preston Jackson is related to other HistoryMakers

Sculptor, art educator and gallery owner Preston Eugene Jackson was born on March 1, 1944 in Decatur, Illinois. The son of Shirley Armstrong Jackson and foundry worker, T.J. Jackson, he grew up in Decatur where he began drawing at the age of seven. Jackson attended Oakland Elementary School and Stephen Decatur High School, where he ran the one hundred yard dash in 9.7 seconds. Graduating in 1962, he attended Millikin University while working at Revere Copper. In 1967, Jackson enrolled in Southern Illinois University where he earned his B.A. degree while playing jazz guitar with his group, Preston Jackson and the Rhythm Aces. Jackson, mentored by Marvin Klavin, obtained his M.F.A. degree from the University of Illinois in 1972.

From 1971 to 1972, Jackson served as an instructor of drawing and painting at Decatur’s Millikin University. He was professor of art at Western Illinois University from 1972 to 1989. Jackson joined the School of the Art Institute of Chicago in 1989 as professor of sculpture and head of the Figurative Area. Appointed chair of the Sculpture Department in 1994, Jackson served in that capacity until 1996. Since 1995, Jackson has served as owner of The Raven Gallery, home of the Contemporary Art Center in Peoria, Illinois.

As an artist, Jackson specializes in bronze and steel sculpture and painting. Best known for his work with bronze castings, Jackson has also created two-dimensional pieces and large monuments. Jackson is recipient of five state public art commissions through the state’s Capital Development Board. His works include a life size bronze Jean Baptiste Point du Sable in Peoria; bronze façade and doors for the Cahokia Mounds Museum; a Martin Luther King memorial bust for Danville, Illinois; “Let’s Play Two,” a bronze relief of Ernie Banks for ESPN Zone in Chicago; “Dr. Dan,” a bronze bust of surgeon Dr. Daniel Hale Williams for Northwestern University and a cast bronze sculpture of Irv Kupcinet for the City of Chicago. Jackson’s major exhibitions and shows include: “Duo Exhibit,” 1995, in Rockford and “Bronzeville to Harlem,” shown since 1997 in nine different cities. Inspired by African American oral tradition, Jackson created the exhibit, “Fresh from Julieanne’s Garden” which has been exhibited since 2004 in Chicago, Peoria, Madison, Wisconsin and other cities. Jackson’s lectures and workshops have been presented at Oklahoma City, Chicago, St. Louis, Jackson, Mississippi, Decatur and Bloomington, Illinois. His work has been displayed across the United States in exhibitions, and he was named the 1998 Laureate of the Lincoln Academy of Illinois. Currently, he serves as a professor of sculpture and the head of the figurative area at the School of the Art Institute of Chicago and is owner of the Raven Gallery, home to the Contemporary Art Center of Peoria. Jackson is the sculptor of The HistoryMakers bronze award statuettes.

See how Preston Jackson is related to other HistoryMakers
Click Here To Explore The Archive Today!