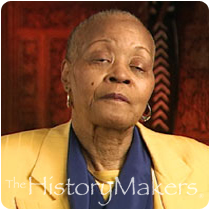 See how Precious Lashley is related to other HistoryMakers
Donate Now

Award-winning fashion designer, manufacturer and teacher Precious Lashley set trends for women of style for more than forty years. A graduate of Alabama’s Tuskegee Institute, Lashley began her career as a couture designer for private clients in the early 1950s. She went on to study design and manufacturing at Ray-Vogue College of Design in the early 1970s before founding Lynn Stuart’s School of Dressmaking, which she named for her three children, Meryl Lynn, Iris Lynn and Robert Stuart. By 1973, Lashley was designing under her Lynn Stuart’s label and producing annual fashion shows to showcase her designs as well as those of her students.

By the mid-1980s, Precious designs were a routine feature in Fairchild Publications’ fashion trade paper, Women’s Wear Daily, Vogue and Ebony, as well as local press, including The Chicago Tribune, The Chicago Sun-Times and The Defender. Lashley received honors for excellence in design from many organizations, including Provident Medical Center, Michael Reese Hospital and Medical Center, Independence Bank, Robeson’s of Champaign, Hadassah, South Suburban Chicago Links and Ebony Fashion Fair. Lashley retired in the early 1990s and occasionally taught design workshops at the University of Illinois at Chicago.

Lashley was interviewed by The HistoryMakers on July 16, 2002.

See how Precious Lashley is related to other HistoryMakers
Donate Now
Click Here To Explore The Archive Today!