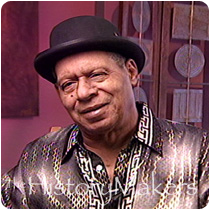 See how Pookie Hudson is related to other HistoryMakers

Thornton James “Pookie” Hudson was born on June 11, 1934 in Des Moines, Iowa. Hudson received his nickname from an aunt who babysat him. He was the only child of Ardath Robinson. His father, who he never knew, was rumored to be a gypsy. James Hudson married his mother while she was pregnant and shortly after his birth the family moved from Iowa to Gary, Indiana. Hudson attended Roosevelt School from first grade until he graduated in 1953. He developed a love for music and singing at a young age and shares the bloodline with famous performers Josephine Baker and Fats Waller. In 1948, while only in junior high school, he formed his first Doo Wop singing group, The Four Bees with fellow members Billy Shelton, Gerald Gregory and Calvin Fossett. The group eventually broke up when one of the members graduated.

The Spaniels were created in 1953 at Roosevelt High School. The teenage celebrities included Hudson as the lead singer, first tenor Ernest Warren, second tenor Willie C. Jackson, baritone Opal Courtney, Jr and bass Gerald Gregory. Upon graduation in 1953, the group became the first artists to sign with Vee Jay Records, the first large, independent African American-owned record company. The group’s initial release Baby It’s You reached number ten on Billboard’s Rhythm and Blues chart. In the spring of 1954 that The Spaniels reached the height of their Doo Wop success when Goodnight Sweetheart Goodnight hit number twenty-four on Billboard’s Top 40 and rose to number five on the R & B chart. The multi-million dollar single was just one of hundreds of songs written by Hudson. To date, the song continues to be a popular favorite among Doo Wop, classic rock and R & B music fans.

In the 1950s, The Spaniels were the top selling vocal group for Vee Jay records. When the label went bankrupt in 1966, Hudson embarked on a solo career and began recording for several other labels. In 1969, the group reunited and returned to the music of their youth. Their song Fairy Tales became a national hit in 1970. Hudson continued to perform with various Spaniels groups until he reassembled the original group.

In 1992, Hudson was inducted into the Rhythm and Blues Hall of Fame. He continued to perform with two Spaniels groups, one in Washington, D.C. and the original group still based in Gary. Hudson raised money to open a Doo Wop museum in Washington, D.C. where he resided with his wife, Delores.

Hudson was interviewed by The HistoryMakers on March 2, 2004.

See how Pookie Hudson is related to other HistoryMakers
Click Here To Explore The Archive Today!