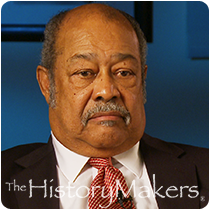 "You either respect us or expect us. (fr. Op. Breadbasket)"

Media advocate Pluria W. Marshall, Sr. was born on October 19, 1937 in Houston, Texas. After graduating from high school, Marshall enlisted in the U.S. Air Force. He served from 1956 to 1960 and was honorably discharged as an Airman, First Class. Marshall went on to graduate from Texas Southern University with his B.A. degree in photography.

In 1969, Marshall was instrumental in the creation of Operation Breadbasket of Texas. His civil rights work evolved both in scope and mission when he established the National Black Media Coalition (NBMC) in 1973. The organization’s mission was to increase the presence of African American media professionals. He later served as national organizer, treasurer and chairman of NBMC. In 1975, Marshall also helped in founding the National Association of Black Journalists (NABJ). Throughout his career, Marshall worked for and also served as the official photographer for NABJ, the National Association of Radio and Television Announcers (NATRA), and mainstream publications including the Jet and Ebony magazines.

Marshall is a member of the Texas State Advertising Commission and was appointed to the U.S. Commission on Civil Rights. In 1973, Marshall was the recipient of Community Service Awards from the National Association of Marketing Developers (NAMD) as well as the Houston Chapter of Omega Psi Phi Fraternity, Inc. Marshall was also honored in 1974 with the Outstanding Ex-Student Award from Texas Southern University and the Marketeer of the Year Award from the Houston Chapter of NAMD.

Pluria W. Marshall, Sr. was interviewed by The HistoryMakers on December 6, 2013.