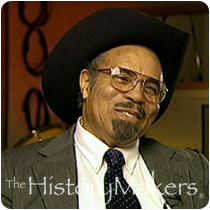 See how Piano C. Red is related to other HistoryMakers
Donate Now

Blues pianist James Wheeler, also known as Piano "C" Red, was born in Montevallo, Alabama, on September 14, 1933. At the age of twelve, Wheeler learned the basics of blues and boogie-boogie piano and just four years later moved to Atlanta, where he lived and performed for the next decade. It was in Georgia that he was given the name "Red," after the red suit he always wore on stage. The "C" (for Cecil, Wheeler's middle name) was added to differentiate Wheeler from another blues pianist from Georgia who went by the name Piano Red. Wheeler then relocated to Chicago and has lived there ever since. He performed with the legendary Count Basie Band at the High Chaparral in Chicago and appeared nightly at Joe Chamble's Club on 47th Street.

Wheeler was also a regular on the Maxwell Street blues scene, where many legendary blues performers got their start. In the early 1960s, Wheeler sat in with such greats as Elmore James, Eddie Taylor, Jimmy Rogers, Hound Dog Taylor and Sonny Boy Williams. He later played there with his own band, the Flat Foot Boogie Men. As the Maxwell Street Market area was threatened with redevelopment, Wheeler was active in efforts to help preserve the Maxwell Street Market and its longstanding role in the blues community. Even though the original market no longer exists, Wheeler and his band still play in and around the area, in addition to performing at other Chicago blues clubs.

Over the years, Wheeler has performed with many Chicago blues legends, including Muddy Waters, B.B. King, KoKo Taylor, Buddy Guy, Little Walter, and Junior Wells. He has also made recordings with Chess, Sound, Dawn, and Big Boy Records.

For more than forty years, Wheeler has worked as a cab driver by day and blues musician by night, and for this reason named his 1999 CD release Cab Driving Man. Because of his continued presence in the Chicago blues scene, Wheeler was featured in the June 1996 issue of Living Blues. Wheeler was also interviewed by Niles Frantz from WBEZ's Eight Forty-Eight program.

James Wheeler was interviewed by The HistoryMakers on April 4, 2003.

See how Piano C. Red is related to other HistoryMakers
Donate Now
Click Here To Explore The Archive Today!