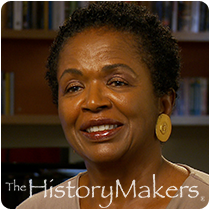 Broadcast executive Phyllis Tucker Vinson Jackson was born in 1948 in Los Angeles, California. Jackson graduated from George Washington High School in 1966. She went on to receive her B.A. degree in child development from California State University in Los Angeles in 1972.

Upon graduation, Jackson was hired as a secretary in the network research department of NBC-TV. She was promoted to a manager 1976, and soon became a program executive and supervisor for many shows, including The Richard Pryor Show, Chico & the Man, Little House on the Prairie, and ChiPs. In 1982, Jackson was promoted to vice president of children’s and family programs at NBC, becoming the first African American woman to reach the level of vice president in programming. While serving as vice president, she implemented, directed and supervised a number of children’s television programs, including the Smurfs, Alvin & the Chipmunks, Mr. T, Punky Brewster, Jim Henson’s StoryTeller, Big Bird Goes to China, and Saved by the Bell. Jackson was instrumental in making NBC Saturday morning the number-one rated kids network for seven years, and she increased advertising sales from $2 million to $35 million.

In 1991, Jackson joined the World African Network, where she served as executive vice president until 1997. After raising her family in South Africa for thirteen years, Jackson returned to the United States when she was hired as the special projects consultant for the launch of The Hub cable network. Jackson was promoted to network story editor of The Hub in 2012. Then, in that same year, she was hired as the vice president of broadcast standards and practices at Saban Brands, where she became responsible for the review of all Saban Brands programming content for the CW Saturday morning block. Jackson has received many honors and awards, including being named to Dollars and Sense Magazine’s America’s Top 100 Black Business and Professional Women. She was also appointed to the board of trustees of the John F. Kennedy Center for the Performing Arts by President Bill Clinton.

Phyllis Tucker Vinson Jackson was interviewed by The HistoryMakers on November 17, 2013.

See how Phyllis Tucker Vinson Jackson is related to other HistoryMakers
Donate Now
Click Here To Explore The Archive Today!