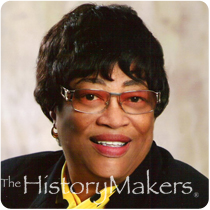 See how Phyllis Hicks is related to other HistoryMakers

Newspaper marketing director and nonprofit administrator Phyllis Jean Mosley Hicks was born on March 7, 1943 in Omaha, Nebraska to Juanita Agee Mosley and James P. Mosley, Jr. Hicks’ civic-minded grandmother, Emma Lee Agee, was a 1919 member of the church pastored by Reverend Earl Little (Malcolm X’s father) and was a childhood friend of the National Baptist Convention’s controversial Reverend Joseph H. Jackson, as well as Whitney M. Young, Jr. Her paternal grandfather Rev. J. P. Mosley Sr. led a demonstration to integrate the swimming pools in 1954 in Chillicothe, Missouri. Whitney M. Young was president of the Omaha Urban League, where Hick's mother worked as his personal secretary. Her mother played trumpet in an all girl band and her father was a saxophone player. Hicks studied piano and voice for several years and she was a member of the Elks Drill Team. She attended Long and Howard Kennedy elementary schools. Hicks was a member of NAACP Youth Chapter, worked on the school paper and was a member of the journalism club and the yearbook staff at Omaha Technical High School. Graduating in 1961, she attended Peru State Teachers College.

Married in 1963, Hicks took a job with the Power Electric Company and volunteered for Omaha Opportunities Industrialization Centers, Inc. (OIC). Hired by OIC in 1967, she produced eight pageants for the organization in addition to serving in as instructor and in an administrative role for thirty years. Hicks joined Sitel Corporation in 1998 as a quality assurance representative and trainer. Employed at CSG Systems, Inc., she served as product support analyst through 2005 when she retired.

Marketing director for the "Omaha Star," the oldest and only African American newspaper in Omaha, Hicks also writes a column called “It’s Just My Opinion” for the publication. She is the founder and mentor to “The Stepping Saints,” a local drill team. Hicks is the recipient of the Woman of the Year, the Black Heritage Award, OIC’s Thirty Year Service Award and the City of Omaha’s Living the Dream Award at the 2002 Martin Luther King, Jr. Celebration.

Phyllis Hicks was interviewed by The HistoryMakers on October 5, 2007.

See how Phyllis Hicks is related to other HistoryMakers
Click Here To Explore The Archive Today!