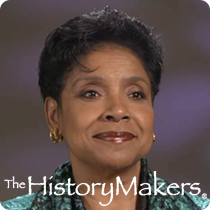 See how Phylicia Rashad is related to other HistoryMakers

Best known for her role of Clair Huxtable on the long-running NBC sitcom The Cosby Show, Rashad has enjoyed a distinguished acting career on television, stage, and film. Her theater credits include Broadway productions of Cat on a Hot Tin Roof , Gem of the Ocean, Into the Woods, Jelly’s Last Jam, Dreamgirls, Ain’t Supposed To Die A Natural Death; also Cymbeline and Bernada at Lincoln Center. Rashad has appeared in films: The Old Settler, For Colored Girls, Creed, and Creed II.

A critically acclaimed stage director, Rashad has led productions at prestigious venues throughout the United States including the Mark Taper Forum, the McCarter, the Goodman, the Long Wharf, the Steppenwolf, Ebony Repertory and the Signature Theatre. Among her growing list of directorial credits are: August Wilson’s Gem of the Ocean, Fences, Joe Turner’s Come and Gone, for which she received the 2014 NAACP Theatre Award for Best Director, and Ma Rainey’s Black Bottom; Lorraine Hansberry’s A Raisin in the Sun; Paul Oakley Stovall’s Immediate Family and Stephen Adly Guirgis’ Our Lady of 121st Street.

Respected in the academic world, Rashad was the first recipient of the Denzel Washington Chair in Theatre at Fordham University, and has been bestowed with numerous honorary doctorate degrees from institutions like Providence College, Tuskegee University, Carnegie Mellon University, Fordham University, Howard University, Barber-Scotia College, Bennett College, Brown University, Clark Atlanta University, Morris Brown College, and Spelman College, presented to her by former First Lady Michelle Obama at the 2011 commencement. Together, she and her sister, Debbie Allen Nixon, established the Dr. Andrew A. Allen Scholarship Award for theater students at Howard University. Rashad also conducts Master Classes at colleges and universities across the country, and served as a master teacher for the 2015 Lunt Fontanne Fellows at the Ten Chimneys Foundation.

Throughout her lifetime, Rashad has maintained a commitment to community service exemplified through her participation as a Director of Brainerd Institute Heritage in Chester, South Carolina. An active member of several organizations devoted to arts education and philanthropic endeavors, Rashad is honored to serve as Brand Ambassador of the National Trust for Historic Preservation African American Cultural Heritage Fund.

Inducted into the Theater Hall of Fame in 2016, Rashad counts among her many honors: People’s Choice Awards, NAACP Image Awards, The Will Award from the National Shakespeare Theatre, the Spirit of Shakespeare Award from the Chicago Shakespeare Theater, the Drama Desk and Tony Awards for Best Actress in a Play for her riveting performance as Lena Younger in the Broadway revival of Lorraine Hansberry’s A Raisin in the Sun, and the 2016 Lucille Lortel Award for Outstanding Leading Actress in a Play for her performance as Shelah in Tarrell Alvin McCraney’s Head of Passes at the Public Theater.

Phylicia Rashad was interviewed by The HistoryMakers on December 13, 2016 and February 2, 2017.

See how Phylicia Rashad is related to other HistoryMakers