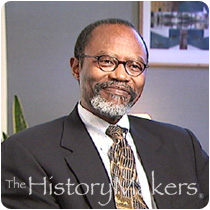 See how Phillip L. Clay is related to other HistoryMakers
Donate Now

When Phillip L. Clay, Ph.D., was appointed as the chancellor of the Massachusetts Institute of Technology on July 1, 2001, he became the highest-ranking African American official in the Institute’s 136-year history. As chancellor, Clay has oversight responsibility for undergraduate and graduate education, student life and services, research policy, strategic planning, campus development, international initiatives and the management of MIT’s large-scale institutional partnerships.

Born on May 17, 1946, Clay grew up in Wilmington, North Carolina and graduated with honors from the University of North Carolina in Chapel Hill in 1968. In 1975, he received a Ph.D. in city planning from MIT. Upon graduating from MIT, he was appointed immediately as an assistant professor in MIT’s Department of Urban Studies and Planning. He rose through the ranks, first becoming associate professor and then becoming a full professor in 1992. Between 1980 and 1984, Clay also served as the assistant director of the Joint Center for Urban Studies of MIT and Harvard University.

Clay is recognized as a national authority on urban housing policy and community-based organizational development. He has been the principal investigator in several studies examining affordable housing, housing preservation and urban gentrification. For example, in a 1987 study commissioned by the Neighborhood Reinvestment Corporation, he identified the market and institutional conditions contributing to the erosion of low-income rental housing and documented the need for a national preservation policy. He later served on the national commission that recommended the policy that became part of the Housing Act of 1990. In research sponsored by several national foundations, Clay has evaluated the effectiveness of various initiatives to build organizational and developmental capacity in community-based development entities.

Clay is also a founding member of the National Housing Trust, which addressed the issue of housing preservation in urban areas. At the time of the interview, he the vice-president of the board of The Community Builders, one of the country’s largest non-profit producers of affordable housing.

Clay and his wife, Cassandra, live in Boston, and have a daughter, Elizabeth.

See how Phillip L. Clay is related to other HistoryMakers
Donate Now
Click Here To Explore The Archive Today!