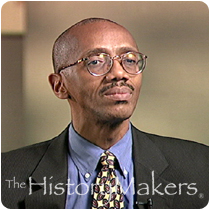 See how Phillip Jackson is related to other HistoryMakers
Donate Now

Phillip Jackson was born in Chicago, Illinois, on September 22, 1950. After graduating from DuSable High School, Jackson attended Roosevelt University, where he earned his bachelor’s degree in philosophy in 1974. From there, Jackson attended National Louis University, earning a certificate in education.

Following his graduation, Jackson went to work for Chicago publishers Kroch’s and Bretano’s; he remained there until 1997, serving as senior vice president of the organization. During his time at Kroch’s and Bretano’s, Jackson began his involvement in the greater Chicago community. In 1994, Jackson joined the Chicago Office of Management and Budget, where he was in charge of human services working under Paul Vallas. The next year, Gerry Chico and Mayor Richard M. Daley brought Jackson on board with the Chicago Public Schools, where he was the director of intergovernmental affairs. In 1999, Jackson became the CEO of the Chicago Housing Authority. During his career, Jackson has also served as CEO of the Boys and Girls Clubs of Chicago and the chief of education for the Chicago Public Schools.

Jackson managed the Black Star Project, which he also founded. The Black Star Project is an organization designed to help young students achieve all of their educational potential, and to get parents and educators more involved in their students' lives. Eventually Jackson's involvement in local politics and strong support from the community led to his seeking statewide office; in 2008 he ran for the position of State Representative of the 26th District of Illinois, but was defeated.

Jackson has received numerous awards, including the Chicago Cares Power of One Leadership Award, and the 2003-2004 Illinois Fatherhood Initiative’s Father of the Year.

See how Phillip Jackson is related to other HistoryMakers
Donate Now
Click Here To Explore The Archive Today!