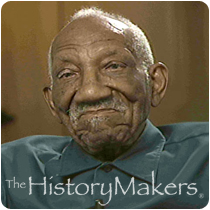 See how Philip Simmons is related to other HistoryMakers
Donate Now

Blacksmith Philip Simmons was born on June 9, 1912 to Rosa Simmons on Daniel Island, South Carolina. He was raised by his grandparents until he was eight years old. He then went to live with his mother in Charleston, South Carolina. He completed the sixth grade at Buist Elementary School in Charleston. When he was thirteen years old, Simmons became the apprentice of the local blacksmith, Peter Simmons (no relation). After which, he worked for almost eighty years as a blacksmith.

Simmons’ first duties were to clean floors, make and maintain the fire and hold the horses. He moved on to other work, much of which involved shoeing horses and repairing carriage wheels. Although cars replaced horses as modes of transportation, Simmons mastered other tools, allowing him to create trailers for cars. In addition, he learned how to repair ironwork for houses and he became skilled at ornamental ironwork. Sometimes, Simmons would be commissioned to do specific work, but most of the time, the image was his own design. He has fashioned over 500 decorative pieces of ornamental wrought iron throughout Charleston, South Carolina. Simmons fashioned a gate for the 1996 Summer Olympics in Atlanta, Georgia.

In 1982, Simmons created his favorite work, "The Star and Fish Gate." It won the National Heritage Award and the National Endowment of the Arts Award, and it was purchased by the Smithsonian. Simmons has also received the Elizabeth O’Neill Verner Governor’s Award for Lifetime Achievement in the Arts.

The vestry and congregation of St. John’s Episcopal Church dedicated the grounds of the church to develop a commemorative landscaped garden as a tribute to his exceptional mastery of wrought iron. In 2006, South Carolina State University awarded him an honorary Ph.D. in F.A. degree.

Philip Simmons was interviewed by The HistoryMakers on February 1, 2007.

See how Philip Simmons is related to other HistoryMakers
Donate Now
Click Here To Explore The Archive Today!