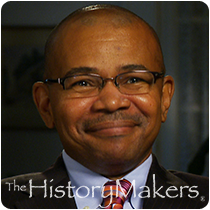 "It Is Open To Interpretation."

Historian, writer, appraiser and collector Philip J. Merrill was born in 1962 in Baltimore, Maryland, and grew up in the Sandtown-Winchester neighborhood of Baltimore. His mother headed a nonprofit job training institute for the disadvantaged; his father, George B. Merrill, was a pastor. Merrill’s great-grandmother helped to raise him. He was one of only two African American students in his graduating class of 1981 at the Friends School of Baltimore. Merrill would go on to graduate from Loyola University in Maryland in 1985.

In 1994, Merrill founded the organization Nanny Jack & Company, an archives and consulting agency specializing in creating projects that illuminate the African American experience through memorabilia, oral history and research. The company would eventually house over 30,000 artifacts, including photographs, rare books, folk art, documents, music, dolls, furniture, and quilts. Nanny Jack & Company would go on to collaborate with various educational organizations and television channels, including The Smithsonian Institution’s Anacostia Museum and Center for African American History and Culture, the Discovery Channel, the Maryland Historical Society, Maryland Public Television, and the History Channel. In 1996, Merrill became an appraiser with the Public Broadcasting Service’s (PBS) television show Antiques Roadshow. He created the category for black memorabilia on Antiques Roadshow, and would stay on the program until 2001. Then, in 2006, Merrill became a fellow of Open Society Institute, where he developed the “Know History, Know Self” program, which used artifacts to teach African American students about their family, community and school history.

In 1998, Merrill published the book The Art of Collecting Black Memorabilia, and, in 1999, he published The Black America Series: Baltimore, which chronicled the history of the Baltimore’s African American community. Merrill was also the editor of a 2002 book of historical photographs entitled The World War II Black Regiment that Built the Alaska Military Highway: A Photographic History. Then, in 2013, he authored the children’s book, How Princess Wee Wee Got Her Name. Merrill was named Baltimore City Paper’s Best Historian in 2001, and, in 2002, Merrill received the Towson University’s Distinguished Black Marylander Award. He was awarded an Honorary Doctorate of Humane Letters from Eastern Theological Seminary in 2007.

Philip J. Merrill was interviewed by the The HistoryMakers on August 8, 2013.