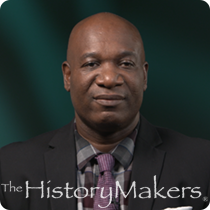 See how Peter London is related to other HistoryMakers
Donate Now

Dancer, choreographer and artistic director Peter London was born on May 10, 1960 in Port of Spain, Trinidad and Tobago to Dennis Bedeau Stanclaus and Belle Stanclaus. While in Trinidad and Tobago, London studied West African dance. He received a certificate in male elementary ballet from the Royal Academy of Dancing in 1982 and attended the Caribbean School of Dancing before coming to the United States and enrolling at The Julliard School in New York and earned his diploma in dance in 1987.

Before moving to the United States, London was part of the Barataria Folk Dance Group from 1976 to 1983 and joined the Astor Johnson Repertory Dance Theater of Trinidad and Tobago, where he danced as Astor Johnson’s protégé. London also was a dance teacher in Trinidad and Tobago. In 1987, London joined the Limón Dance Company, which he toured with as a principal dancer. London moved to the U.S.; and, in 1988, he was recruited to join the Martha Graham Dance Company as a principal dancer, where he performed with dancers such as Mikhail Baryshnikov and Denise Vales. After Martha Graham’s death in 1991, London took a yearlong break from dancing and began teaching at the New World School of the Arts in Miami, Florida. He was invited to tour with the Martha Graham Dance Company again by Ronald Protas in 1992, which he toured with until 1997.

London returned to the New World School of the Arts that year and served as a professor of dance at Miami Dade College. From 2007 to 2010, London taught at The Alvin Ailey School in New York. In 2011, London received a grant of $120,000 from the Knight Foundation in order to form the Peter London Global Dance Company. London showcased pieces that featured Afro-Caribbean dance, as well as Haitian and Afro-Cuban music. London also served as a mentor to; Jamar Roberts of the Alvin Ailey American Dance Theater, Lloyd Knight of the Martha Graham Dance Company, and Robert Battle, artistic director at the Alvin Ailey American Dance Theater.

Peter London was interviewed by The HistoryMakers on March 7, 2017.

See how Peter London is related to other HistoryMakers
Donate Now