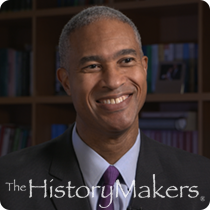 Economist and academic administrator Peter Blair Henry was born on July 30, 1969 in Kingston, Jamaica to George Henry and Caroll Henry. After moving to Wilmette, Illinois with his family at age nine, Henry attended New Trier High School. He earned his B.A. degree with distinction and highest honors in economics from the University of North Carolina at Chapel Hill in 1991. A Rhodes Scholar, Henry graduated from Oxford University with his B.A. degree in mathematics in 1993, and went on to receive his Ph.D. degree in economics from the Massachusetts Institute of Technology in 1997.

Henry worked as a consultant to the Governor of The Eastern Caribbean Central Bank in 1994. The following year, he worked as a consultant to the Governor of the Bank of Jamaica. In 1997, Henry became an assistant professor of economics at the Stanford University Graduate School of Business. He was promoted to associate professor of economics with tenure in 2005, becoming the first tenured African American professor at the Graduate School of Business. He obtained a full professorship in 2007, and was named the Konosuke Matsushita Professor of International Economics in 2008. That same year, he led the external economic advisory group for then-Senator Barack Obama’s presidential campaign. After the election, Henry served on President Obama’s transition team as leader of the review of international lending agencies such as the International Monetary Fund and the World Bank, and was appointed to the President’s Commission on White House Fellowships the following year. In 2010, Henry became the first African American dean, and the youngest dean, of New York University’s Leonard N. Stern School of Business. He served in the position for eight years, becoming Dean Emeritus in 2018 and continuing as William R. Berkley Professor of Economics and Finance.

In 2013, Henry released his first book, Turnaround: Third World Lessons for First World Growth. Henry also published numerous articles on international economics, including “Debt Relief,” with Serkan Arslanalp, in the Journal of Economic Perspectives (2006); “Capital Account Liberalization: Theory, Evidence, and Speculation” in the Journal of Economic Literature (2007); and “Institutions vs. Policies: A Tale of Two Islands,” with Conrad Miller, in the American Economic Review (2009). Henry was named to the Citigroup Board of Directors in 2015 and the Board of Directors of Nike in 2018. He also served on the Board of Directors of General Electric from 2016 to 2018.

In 2014, with support from the Alfred P. Sloan Foundation, Henry established the Ph.D. Excellence Initiative, a post-baccalaureate program designed to address underrepresentation in economics by mentoring exceptional students of color interested in pursuing doctoral studies in the field.

Henry and his wife, Lisa J. Nelson, have four children.