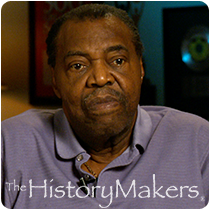 See how Pete Moore is related to other HistoryMakers
Donate Now

Singer, songwriter and producer Warren “Pete” Moore was born on November 19, 1939 in Detroit, Michigan. He attended Northern High School in Detroit, and was a childhood friend of singer Smokey Robinson. The two formed a singing group in 1955 called the Five Chimes, where Moore was the bass singer. In 1956, they changed their group’s name to the Matadors.

The Matadors caught the attention of Berry Gordy in the late 1950s, and, in 1959, the group recorded their first songs on Gordy’s newly formed Tamla label. The Matadors then changed their name to the Miracles, and went on to become the first successful recording act for Gordy's Motown Records. In 1967, the Miracles changed their name to Smokey Robinson & the Miracles. After producing many musical hits, Robinson left the group in 1972, but Moore and the Miracles carried on until the entire group disbanded in 1978. In 2007, Moore founded the Las Vegas-based entertainment firm, WBMM Enterprises. He is also co-owner, with Miracles member Billy Griffin, of the music publishing company Grimora Music.

Moore co-wrote several of the Miracles hits, including 1965’s "Ooo Baby Baby;” 1965’s Grammy Hall of Fame inductee “The Tracks Of My Tears;” “My Girl Has Gone,” a Billboard Top 20 hit from 1965; “Going to a Go-Go;” and the multi-million selling #1 pop smash, "Love Machine;" among others. The song "Overture" from the Miracles’ album City of Angels, co-written by Moore, was used as the official theme on Radio Monte Carlo in France from 1978 to 1979. He was also the vocal arranger on all of the Miracles’ hits.

Moore has received many honors and awards. He has been a four-time winner of the Broadcast Music, Inc. award for songwriting, and was inducted with the rest of the Miracles into the Vocal Group Hall of Fame in 2001. In 2009, the Miracles received a star on the Hollywood Walk of Fame, and, in 2012, Moore was inducted into The Rock and Roll Hall of Fame. He has received the Award Of Merit by the American Society of Composers, Authors,and Publishers. The Miracles are also four-time inductees into the Grammy Hall of Fame.

Pete Moore was interviewed by The HistoryMakers on November 21, 2013.

See how Pete Moore is related to other HistoryMakers
Donate Now