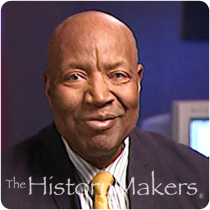 See how Pervis Spann is related to other HistoryMakers
Donate Now

Born in Itta Bena, Mississippi, on August 16, 1932, Pervis Spann distinguished himself as a broadcaster, exposing generations to the blues.

Spann worked hard from an early age, caring for his mother after she suffered a stroke. At age 14, he managed the Dixie Theater, a local all-black theater. In 1949, he moved with his mother and sister to Battle Creek, Michigan. However, Spann soon left to work in Gary, Indiana. Spann enlisted in the Army toward the end of the Korean War. After completing his service, he moved to Chicago and settled down. He became interested in broadcasting and attended the Midway Television Institute and the Midwestern Broadcasting School on the G.I. Bill.

Spann widened his sphere of influence during the 1960s, and began managing talented performers such as B.B. King. He booked major acts, including the Jackson 5 and Aretha Franklin. Spann also owned several South Side clubs in Chicago, including the Burning Spear.

In 1975, WVON was sold and changed frequency. Forming a business syndicate with Vernon Jarrett and Wesley South, Spann bought the license to the original frequency in 1979. Listeners to the new station, WXOL, heard an all-blues format and many of the same voices from the old WVON. The station reclaimed the old call letters in 1983. In the 1980s, Spann added another station to his radio empire, WXSS in Memphis. He later sold this station. His focus then turned to building WVON, with his daughter, Melody Spann Cooper, at the helm. He continues his career promoting the blues as the co-host of the popular cable t.v. program "Blues and More."

See how Pervis Spann is related to other HistoryMakers
Donate Now
Click Here To Explore The Archive Today! 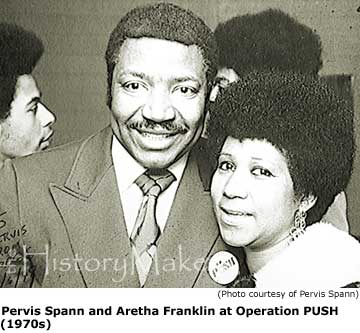 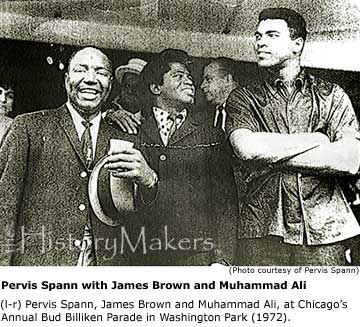