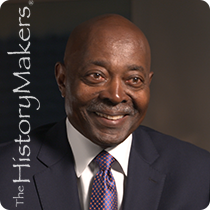 See how Perry Watson is related to other HistoryMakers
Donate Now

In 1977, Watson joined the Xerox Corporation as a copier salesman and was promoted to regional sales manager in 1980. Watson was also a member of the Detroit United Concerned Employees group at Xerox, an organization of African American Xerox employees. After thirteen years with Xerox, Watson participated in the Chrysler Corporation’s Minority Dealer Training program. After he completed training, Watson was selected to manage North Star Dodge in Brooklyn Center, Minnesota in 1992. He rebranded the dealership to Brookdale Dodge and remained as manager for nine years. In 2001, Watson became the third African American in the United States, and the first African American in Indiana, to own a Lexus dealership. He owned Lexus of Mishawaka, Indiana and sold Brookdale Dodge in 2004. Watson was also a guest professor of marketing at Western Michigan University and taught courses in the Entrepreneur Lecture Series at the Judd Leighton School of Business and Economics at Indiana University, South Bend.

Watson received the Upward Bound Program Honor, the City of South Bend Drum Major Community Service Award in 2008, and the Mid-Eastern Association of Educational Opportunity Program’s TRiO Achiever Award in 2012. Both of his dealerships have earned multiple awards for customer satisfaction and market leadership in sales. Watson was also named a top 100 dealer by Black Enterprise for twenty three consecutive years, and received the South Bend Rotary Club Distinguished Citizens Award in 2014.

Watson was a member of the St. Joseph County Chamber of Commerce, the Elkhart Chamber of Commerce, Omega Psi Phi fraternity, the Indiana Auto Dealers Association, and became chair of the National Association of Minority Dealers in 2015. He was also the vice president of programs for 100 Black Men of Greater South Bend and a member of the Entrepreneurial Advisory Committee for the Beacon Health System Memorial Hospital, and served as chair of the board of Memorial Hospital of South Bend, Indiana. Watson was also active in the Urban League, the Boys and Girls Club, and Jack and Jill of America.

Perry Watson was interviewed by The HistoryMakers on August 11, 2017.

See how Perry Watson is related to other HistoryMakers
Donate Now