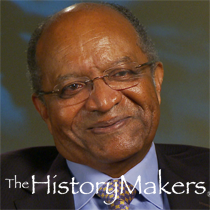 See how Percy Pierre is related to other HistoryMakers
Donate Now

After graduation, Pierre began a series of successful posts in government and higher education. In 1969, Pierre was selected to serve as a White House Fellow and Deputy to the Assistant to the President for Urban Affairs. In 1971, he joined the faculty of Howard University as Dean of the School of Engineering. As dean, Pierre was instrumental in the founding of the National Action Council for Minorities in Engineering (NACME). In 1977, he left Howard University to serve as Assistant Secretary to the United States Army for Research, Development, and Acquisition, where he managed a $12 billion budget. Pierre started his own consulting business, Percy A. and Associates in 1981. He returned to academia in 1983, serving as President of Prairie View Agricultural and Mechanical (A&M) University, and later as Honeywell Professor of Electrical Engineering.

Pierre came to Michigan State University in 1990 as Vice President for Research and Graduate Studies. In 1995, he became a professor of electrical and computer engineering. Pierre has taught courses and participated in research in the areas of signals and systems, random processes, and signal detection and estimation. He believes his greatest achievement in his field to be the exploration of linear functions and their properties. In addition to his research, Pierre has also created numerous programs to increase the financial support and mentoring opportunities available for minority graduate engineering students; most notably creating the Sloan Engineering Program in 1998. Pierre has served on many boards, including the National Security Advisory Board and the Defense Science Board. He was honored with the Founders Award from NACME in 2004 in celebration of the organization’s thirtieth anniversary. He also received the Mentor Award for Lifetime Achievement from the American Association for the Advancement of Science in 2008. Pierre is married to Olga A. Markham and they have two grown daughters, Kristin Clare and Allison Celeste.

Percy A. Pierre was interviewed by The HistoryMakers on September 13, 2012.

See how Percy Pierre is related to other HistoryMakers
Donate Now
Click Here To Explore The Archive Today!