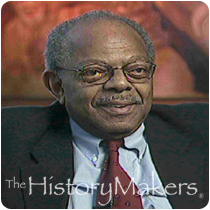 See how Percy Bates is related to other HistoryMakers
Donate Now

Educational psychologist Percy Bates was born July 8, 1932 in Pensacola, Florida. Raised by his mother, Gladys Travis Bates, he attended Spencer Bibbs Elementary School and Booker T. Washington High School. After moving to Detroit, Bates ran track and played football at Hamtramack High School, and he graduated from there in 1950. Entering the United States Army in 1952, Bates served at Fort Bliss in El Paso, Texas, where he sang with fellow soldier and pianist Earl Grant. After earning his B.S. degree in biology from Central Michigan University in 1958, Bates received his M.A. in vocational rehabilitation in 1961 from Wayne State University and his Ph.D. in educational psychology from the University of Michigan in 1968.

In 1968, during a strike of black students demanding black faculty at the University of Michigan, Bates was promoted to assistant professor of education. At the University of Michigan’s School of Education, Bates served as assistant division director of curriculum, teaching and psychological studies and as director of programs for educational opportunity. He later became deputy assistant secretary of special education in the United States Department of Education.

Bates is a member of the Board in Control of Intercollegiate Athletics at the University of Michigan. He is also very active in University of Michigan’s Student Athlete Advisory Committee. A founding board member and former chairman of the Higher Education Commission of the National Alliance of Black School Educators, Bates has received numerous awards. Bates lives in Ann Arbor with his wife Cheryl.

See how Percy Bates is related to other HistoryMakers
Donate Now
Click Here To Explore The Archive Today!