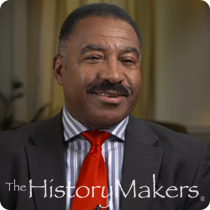 See how Penfield W. Tate III is related to other HistoryMakers
Donate Now

Lawyer and state government official Penfield W. Tate III was born on May 19, 1956 to Ellen Mildred Tate and Penfield W. Tate II. Tate grew up on military bases while his father served in the U.S. Army. His family eventually settled in Boulder, Colorado, where Tate’s father became the city’s first African American city councilman and mayor. Tate earned his B.A. degree in sociology at Colorado State University in Fort Collins, Colorado in 1978, and his J.D. degree from Antioch School of Law in Washington, D.C. in 1981.

Upon graduation from law school, Tate obtained a position as a trade regulation attorney with the Denver Regional Office of the Federal Trade Commission. In 1984, Tate left the Federal Trade Commission and joined the law firm of Trimble, Tate & Nulan, founded by his father seven years earlier. He became a partner with the firm in 1988. In 1990, Tate returned to public service in an administrative role at Denver Mayor Federico Peña’s office, but rejoined Trimble, Tate & Nulan in 1991 once Mayor Pena’s term ended. The following year, he and his father founded the law firm of Tate & Tate, P.C. Shortly after founding the new firm, Tate took a leave of absence to become executive director of the Colorado Department of Administration. In 1994, he was elected to the vice chairmanship of the Colorado Democratic Party, which he resigned in 1996 during his successful run for Colorado State House. The following year, he was elected to the the Colorado State House of Representatives, representing the 8th District. In 2000, Tate was elected to serve the 33rd District in the Colorado State Senate. In 2003, he resigned from this position to run for Mayor of Denver, but was defeated. He returned to public finance law practice, and joined the law firm of Kutak Rock in 2015, where he represented public entities, lenders, and underwriters engaged in financing essential public improvements, and advised local and state governments. He was also a frequent panelist on the political talk show Colorado Inside Out.

Tate has served as a trustee of the Colorado Children’s Chorale and on the board of Denver Water, the Denver Metro Chamber of Commerce, and the Colorado Housing and Finance Authority. He was named the 2004 Father of the Year by the National Father’s Day Coalition and the American Diabetes Association.

Penfield W. Tate III was interviewed by The HistoryMakers on September 25, 2016.

See how Penfield W. Tate III is related to other HistoryMakers
Donate Now
Click Here To Explore The Archive Today!