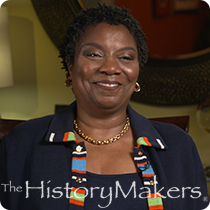 See how Penelope Stewart is related to other HistoryMakers

In 1981, Stewart left Mount Mary College to open the Ambiance hair salon and a jewelry design business in Milwaukee. She was also hired by the Milwaukee Urban League to design and make handbags for their mother and daughter events, and she taught children how to design wearable art in the Milwaukee Public Schools. In 1997, Stewart joined All Pro Broadcasting, Inc. as the general sales manager and senior account executive for several radio stations in Milwaukee including WMCS Radio, WZTI Radio, WKKV Radio and WJMR Radio. In 2004, Stewart was hired at the BloodCenter of Wisconsin as the community outreach manager and worked to educate the African American community about sickle cell disease as well as managed the bone marrow donation program. In 2013, Stewart went to work at Columbia St. Mary’s Hospital in Milwaukee, Wisconsin where she raised awareness about disease prevention, health care and informational resources. In 2015, to address the rising infant mortality rate in Milwaukee, Stewart helped develop the Strong Baby Sanctuary Program, and partnered with local organizations to reduce infant mortality. She also created the Blanket of Love Program, which offered prenatal education for mothers and assistance for poor families. In 2018, Stewart helped launch the community wellness program, Be of Good Heart, to raise awareness about diabetes and hypertension and offer free health screenings.

In 2004, Stewart received the Jammin’ Legends Award from WJMR Jammin’ 98.3 FM Radio, in Milwaukee. She was also the recipient of the Jammin’ 98.3 Radio Community Leader Award, the Health Care Heroes Award by the Milwaukee BizTimes, and was named the Omega Psi Phi Fraternity, Inc. Kappa Phi Chapter Milwaukee Citizen of the Year.

Stewart has one daughter, Tamara and one son, Jamie.

Penelope Stewart was interviewed by The HistoryMakers on February 23, 2017.

See how Penelope Stewart is related to other HistoryMakers
Click Here To Explore The Archive Today!