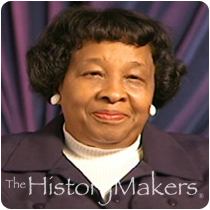 See how Peggy Montes is related to other HistoryMakers
Donate Now

Bronzeville Children's Museum founder, Peggy Montes, started her career as a teacher in the Illinois public school system. Montes was born in Chicago, Illinois, on October 17, 1936, and graduated from DuSable High School in 1954.

In 1978, Montes began devoting her energy to philanthropic and volunteer work, becoming particularly involved with the DuSable Museum of African American History. She served as chairperson of the Board of Trustees for the Museum from 1989 to 1993, heading the construction of the museum's Harold Washington wing. This role gave her the distinction of being the first woman to chair both the museum's governing body and its building committee. She also was appointed by the late Mayor Harold Washington as executive director of the Chicago Commission on Women.

On August 20, 1993, Montes and a group of dedicated business, civic, cultural and educational leaders founded the Bronzeville Children's Museum in Evergreen Park, Illinois, a suburb of Chicago. The first and only African American children's museum in the country, the Bronzeville Children's Museum's mission is to educate and expose children to the rich contributions, culture, and heritage of African Americans and people of Africa and its diaspora through activities, interactive exhibits, and games.

She is the recipient of many honors and awards, including the Illinois Federation of Business and Professional Women, Inc. 1987 Woman of Achievement Award and Dollars & Sense Magazine's 1993 America's Best & Brightest Business and Professional Award. Currently, Montes is a member of the Illinois Art Council, and a Trustee at both the DuSable Museum of African American History and Chicago State University.

See how Peggy Montes is related to other HistoryMakers
Donate Now
Click Here To Explore The Archive Today!