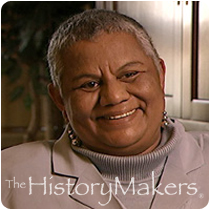 Favorite Color:
Red
Favorite Food:
Asian Food
Favorite Time of Year:
Fall
Favorite Quote:
Would you do me a favor?

Favorite Color:
Red
Favorite Food:
Asian Food
Favorite Time of Year:
Fall
Favorite Quote:
Would you do me a favor?

Peggy Cooper Cafritz was born on April 7, 1947, in Mobile, Alabama, to the well known and respected Cooper family. Her upbringing was decidedly Catholic. Her father, a well respected community leader, and her mother, an astounding beauty, worked to provide the correct upbringing for Peggy and her siblings. After graduating from a private Catholic high school, Cafritz attended George Washington University, where in 1968, she earned an undergraduate degree in political science and in 1971, a law degree.

Cafritz became involved with education and the arts in the Washington, D.C., area when, as a law student, she founded the Duke Ellington School of the Arts. Initially a summer arts workshop for minority children, the program was accepted into the D.C. public school system in 1974. For the rest of her life, she continued to serve the school and its non-profit fund-raising affiliate, the Ellington Fund, in numerous positions. Cafritz served on the Executive Committee of the D.C. Board of Higher Education from 1972-1976, which implemented the merger of Federal City College and Washington Teachers College into the University of the District of Columbia (UDC). From 1979-1987, she chaired the D.C. Commission on the Arts and Humanities, and in 1993 President Bill Clinton appointed her to serve as Vice Chair of the President's Committee on the Arts and the Humanities.

Cafritz was the youngest person ever selected to serve as a fellow at the Woodrow Wilson Center for Scholars. She worked as a programming executive for Post-Newsweek and a documentary producer for WTOP-TV from 1974-77, earning both Emmy and Peabody Awards for her documentary work. Her work as an arts reviewer on WETA-TV's "Around Town" also earned her an Emmy Award. Cafritz worked to develop a dramatic literary series for the Community for Public Broadcasting and the Public Broadcasting Corporation from 1977-79 as Executive Director of the Minority Cultural Project, a joint venture between Harry Belafonte and WQED/Pittsburgh.

In November 2000, on a platform stressing the importance of academics, athletics, and the arts, Cafritz ran for President of the D.C. Board of Education and won. Her cousin was former Secretary of Labor, Alexis M. Herman.

See how Peggy Cooper Cafritz is related to other HistoryMakers
Donate Now
Click Here To Explore The Archive Today! 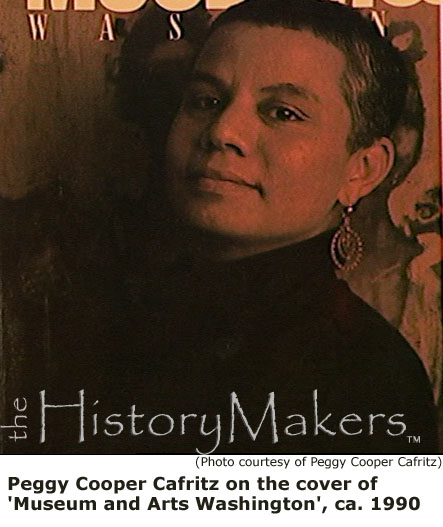 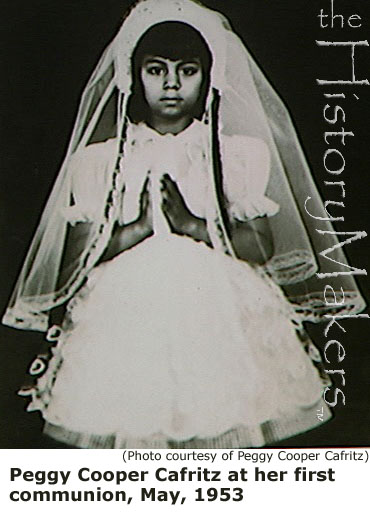