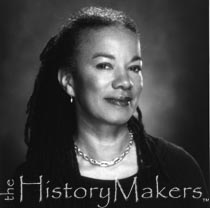 See how Peg Alston is related to other HistoryMakers

Private art dealer Peg Alston was born in Camden, New Jersey on December 31, 1938. As a child, Alston always wanted to make a difference. Prior to starting her private art dealership, Alston worked as a social worker from 1969 to 1975. She obtained her B.A. degree from New York University in 1960 and obtained her M.S.W. degree from Columbia University in 1964. She has also continued to study various art classes at the New School for Social Research. Her career in art began in 1969 as a council member for the Studio Museum of Harlem in New York. Inspired by art and private dealing, she became the publicity director for Cinque Gallery. Becoming frustrated because of the lack of visibility for African American artists, she established the Peg Alston Gallery in 1975, a private art dealership, specializing in African American art and sculpture.

Alston has held numerous art-related positions. In 1978, she served as a panel member on the New York State Council for the Arts where she helped to bring visibility to African American artists. In 1980, Alston became the curator for Retour Aux Sources, the first exhibit of African American artists in Abidjan, Ivory Coast, and West Africa. In 1989, she was the coordinator for the Celebration of Tokyo and New York City as Sister Cities Art Festival, which led to her receiving the Distinction of Honor Award by the New York Coalition of Black Women that same year. From 1990 to 1992, she and Dr. Kaye E. Davis co-sponsored Established Art Seminars in New York City, which helped to bring African American art to a broader audience.


Alston continues to work to promote the works of African American artists. In 1995, she was Honorary Chair Person for Black Pearls: Treasures of African American Women Artists, an exhibit presented by the New York Coalition of 100 Black Women at New York City’s Cinque Gallery. Also in 1995, she was a panel speaker for Collecting African American Art at the Montclair Art Museum in New Jersey and she was also a panel speaker at the Conference on Female Entrepreneurship at the Fashion Institute of Technology, which was sponsored by the National Association of Female Executives. Alston has received several awards for her work in African American Art including a Certificate of Recognition from National Scene Magazine.

Alston lives in New York with her husband and continues to run the Peg Alston Gallery of African American art and sculpture.

See how Peg Alston is related to other HistoryMakers
Click Here To Explore The Archive Today!