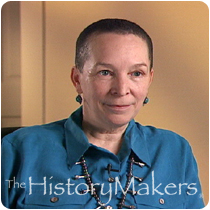 See how Pearl Cleage is related to other HistoryMakers
Donate Now

Playwright Pearl Michelle Cleage was born on December 7, 1948 in Springfield, Massachusetts. Cleage is the youngest daughter of Doris Graham and Albert B. Cleage Jr., the founder of the Shrine of the Black Madonna. After graduating from the Detroit public schools in 1966, Cleage enrolled at Howard University, where she studied playwriting. In 1969, she moved to Atlanta and enrolled at Spelman College, married Michael Lomax and became a mother. She graduated from Spelman College in 1971 with a bachelor’s degree in drama.

Cleage has become accomplished in all aspects of her career. As a writer, she has written three novels: What Looks Like Crazy on an Ordinary Day (Avon Books, 1997), which was an Oprah’s Book club selection, a New York Times bestseller, and a BCALA Literary Award Winner, I Wish I Had a Red Dress (Morrow/Avon, 2001), and Some Things I Never Thought I’d Do, which was published in 2003. As an essayist, many of her essays and articles have appeared in magazines such as Essence, Ms., Vibe, Rap Pages, and many other publications. Examples of these essays include Mad at Miles and Good Brother Blues. Cleage has written over a dozen plays, some of which include Flyin’ West, Bourbon at the Border, and Blues for an Alabama Sky, which returned to Atlanta as part of the 1996 Cultural Olympiad in conjunction with the 1996 Olympic Games. In addition to her writing she has been an activist all her life. Starting at her father’s church, The Shrine of the Black Madonna – Cleage has been involved in the Pan-Africanist Movement, Civil Rights Movement and Feminist Movement. She has also been a pioneer in grassroots and community theater.

Cleage is the mother of one daughter, Deignan, the grandmother of one grandson, Michael, and one granddaughter, Chloe Pearl. She is married to Zaron W. Burnett, a writer with whom she frequently collaborates.

See how Pearl Cleage is related to other HistoryMakers
Donate Now
Click Here To Explore The Archive Today!