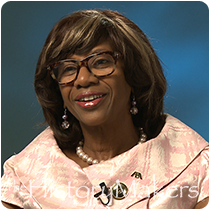 "To whom much is given much is required"

Lawyer Paulette Brown was born on April 28, 1951 in Baltimore, Maryland to Wilbur Brown, a truck driver, and Thelma Brown, a homemaker. She attended Baltimore’s P.S. 145 and Calverton Junior High School, graduating from Northwestern High School in 1969. Brown studied sociology at Howard University before changing her major to political science. In 1973, she received her B.S. degree in political science from Howard University, and went on to receive her J.D. degree from Seton Hall University School of Law in 1976.

Brown spent nine years working as in-house counsel at several Fortune 500 companies, including National Steel Corporation, Prudential Insurance Company of America, Inc., and Buck Consultants Inc. Brown was the founding partner of Brown & Childress, and worked as a solo practitioner for sixteen years. In 1983, she was elected president of the Association of Black Women Lawyers of New Jersey. In 1993, Brown & Childress merged with another firm to become Brown, Lofton, Childress & Wolfe, New Jersey’s largest minority firm at the time. That same year, she was elected president of the National Bar Association, and later served as a municipal court judge in Plainfield, New Jersey. As president of the NBA, Brown led a delegation to monitor the first free and democratic elections in South Africa in 1994, and became a member of the American Bar Association in 1997. Brown joined Duane, Morris & Heckscher LLP as a partner in January 2000, and then she moved to the New Jersey office of Edwards & Angell LLP in 2005. In 2007, she was elected as a member of the American Bar Association’s board of governors. She co-chaired the Commission on Civic Education in the Nation’s Schools in 2010, and in 2015, became the first woman of color to be elected as president of the American Bar Association.

Brown received numerous awards, including the National Bar Association’s highest award, the C. Francis Stradford Award. She also received the Gertrude Rush and Cora T. Walker Legacy Awards from the National Bar Association, the Medal of Honor Award from the New Jersey Bar Foundation, the Spirit of Excellence and Margaret Brent Awards from the American Bar Association, the Award of Excellence from the Thurgood Marshall College Fund, and the Robert L. Carter Legacy Award from the New Jersey chapter of the N.A.A.C.P. She also received the Professional Lawyer of the Year Award from the New Jersey Commission on Professionalism. Brown was repeatedly selected by U.S. News as one of the “Best Lawyers in America” in the area of commercial litigation. She was named to the Ebony Power 100 List in 2014, and was selected as one of the 50 “Most Influential Minority Lawyers in the U.S.” by the National Law Journal and one of the country’s “Most Influential Black Lawyers” by Savoy Magazine.

Brown has one son, Dijaun Brown.

Paulette Brown was interviewed by The HistoryMakers on July 28, 2015.