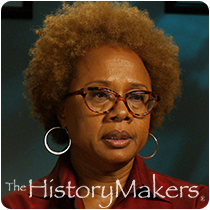 See how Paula Madison is related to other HistoryMakers
Donate Now

Television executive and journalist Paula Williams Madison was born in Harlem, New York in 1952 to Elrick Williams and Nell Lowe Williams. She attended Cardinal Spellman High School in the Bronx. Initially, Madison wanted to become an educator and spent her summers teaching inner-city youth about African American history. After high school, she received a scholarship to Vassar College and graduated with her B.A. degree in 1974.

Madison then moved to Syracuse, New York, where she became a graduate student at Syracuse University Newhouse School of Public Communications and was hired as a reporter at the Syracuse Herald Journal. Her early career was spent as a newspaper reporter in New York and Texas, and as a television news manager and executive in Dallas, Tulsa, and Houston. Madison then returned to New York City as assistant news director at NBC4, and became the station’s vice president and news director in March of 1996. Shortly after, she took on a second role as senior vice president of diversity for NBC. In 2000, Madison was promoted to president and general manager of KNBC, making her the first African American woman to become a general manager of a top news network. She then stepped down from the diversity leadership role. When NBC purchased Telemundo, a Spanish-language network, Madison assumed responsibility for the newly acquired Telemundo stations in Los Angeles, California. In 2007, Madison was appointed executive vice president and chief diversity officer of NBC Universal. The parent company, GE, named her a company officer and vice president.

Madison has served in many organizations during her career. In addition to being named chairman and CEO of the Los Angeles Sparks, she also became a member of the WNBA Board of Governors. Madison is a board member of Greater Los Angeles United Way, a past chairman of the California Science Center Foundation, vice chair of National Medical Fellowships and the Maynard Institute for Journalism Education, and chair of The Nell Williams Family Foundation. In 2013, Mayor Eric Garcetti appointed her a commissioner of the Los Angeles Police Department.

Madison has received many awards, including the Ida B. Wells award from the National Association of Black Journalists (NABJ) in 1998, the Ellis Island Medal of Honor from the National Ethnic Coalition of Organizations in 1999, and the First Amendment Service Award from the Radio and Television News Directors Foundation in 2000. In 2005, Madison was named one of the “75 Most Powerful African Americans in Corporate America” by Black Enterprise magazine and was included in the Hollywood Reporter’s “Power 100.” In 2010, she received the NABJ Legacy Award, was named to Ebony magazine’s 2013 Power 100 List, and received the Pinnacle Award from the Houston Association of Black Journalists.

See how Paula Madison is related to other HistoryMakers
Donate Now
Click Here To Explore The Archive Today!