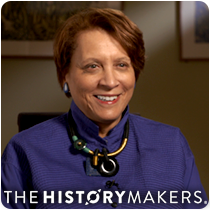 See how Paula Giddings is related to other HistoryMakers
Donate Now

Professor Paula Giddings was born on November 16, 1947 in Yonkers, New York to Virginia Iola Stokes and Curtis Gulliver Giddings. She received her B.A. degree in English from Howard University in Washington, D.C. in 1969, where she served as editor of the university’s literary magazine, The Promethean.

In 1969, Giddings worked as an editorial assistant for Random House and later as a copy editor until 1972. She then became an associate book editor for the Howard University Press. Giddings then moved to Paris, France in 1975 where she served as the Paris bureau chief for Encore America/Worldwide News. In 1977, she was transferred to the New York office and served as an associate editor until 1979. Giddings published her first book, When and Where I Enter: The Impact of Black Women on Race and Sex in America, in 1984. The following year, she served as a contributing editor and book review editor for Essence magazine. She then became a distinguished United Negro College Fund (UNCF) scholar at Spelman College. In 1988, she published In Search of Sisterhood, and subsequently joined the faculty of Douglass College at Rutgers University where she held the the Blanche, Edith, and Irving Laurie Chair in Women's Studies from 1989 to 1991. Giddings also served as a visiting professor at Princeton University and Duke University. In 2001, Giddings joined Smith College as the Elizabeth A. Woodson 1922 Professor of Africana Studies. She also served as the editor of Meridians, feminism, race, transnationalism a peer-reviewed feminist, interdisciplinary journal. She then became Smith College department chair and honors thesis advisor for the department of Africana studies. In 2002, she edited Burning All Illusions: Writings from The Nation on Race 1866-2002; and, in 2008, she published Ida, A Sword Among Lions: Ida B. Wells and the Campaign Against Lynching. Giddings retired from Smith College in 2017.

Giddings has also written extensively on international and national issues and has been published by the Washington Post, the New York Times, the Philadelphia Inquirer, Jeune Afrique (Paris), The Nation, and Sage: A Scholarly Journal on Black Women, among other publications.

In 1982, she received a Ford Foundation Grant; and, in 1985, Giddings was the recipient of the Candace Award from the National Coalition of 100 Black Women. That same year, she received the Alumni Award from Howard University; and, the following year, Giddings won the Westchester Black Women’s Political Caucus Award and the Building Brick Award from the New York Urban League. In 1990, she received the Anna Julia Cooper Award from Sage: A Scholarly Journal on Black Women, and an honorary doctorate degree in humane letters from Bennett College. In 2008, her book Ida, A Sword Among Lions won the Los Angeles Times Book Prize for Biography and was a finalist for the National Book Critics Circle award.

Paula Giddings was interviewed by The HistoryMakers on December 8, 2018.

See how Paula Giddings is related to other HistoryMakers
Donate Now